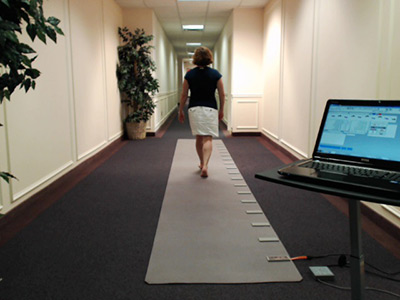 CIR Systems/GAITRitePortable test: This mat finds that people with autism point their left foot outward, rather than forward, when walking.

Using a portable mat embedded with pressure sensors, researchers have shown that adults with severe autism walk more slowly than controls do. The results were published 20 May in Frontiers in Integrative Neuroscience1.

Motor deficits are not considered to be a core feature of autism. However, most people with autism have motor problems ranging from toe-walking to clumsiness and poor handwriting.

One way to assess motor function is to study gait — the positioning of feet and legs while walking. Because this involves motion-capture wires placed on the participant’s legs, however, most studies have focused on high-functioning individuals with autism.

In the new study, the researchers made use of a GAITRite walking system, a foldable 6-meter-long mat embedded with sensors. The sensors detect the placement of the ball of the foot and heel, and the angle of each foot, and relay the information to a computer that can infer stride placement and length2.

The researchers assessed nine adults with autism, all of whom have severe communication deficits. Still, the adults had no difficulty following directions and walking the length of the mat, which they each did six times.

Compared with ten controls, the participants with autism walked more slowly, took shorter steps, and spent more time transitioning between steps. They also placed their left foot on the mat so that it pointed outward, instead facing forward, the study found.

The gait problems seen in the participants with autism are more severe than those described for high-functioning individuals in previous studies, the researchers say. This suggests that motor deficits are a core component of the disorder, they say, and not just a co-occurring symptom.