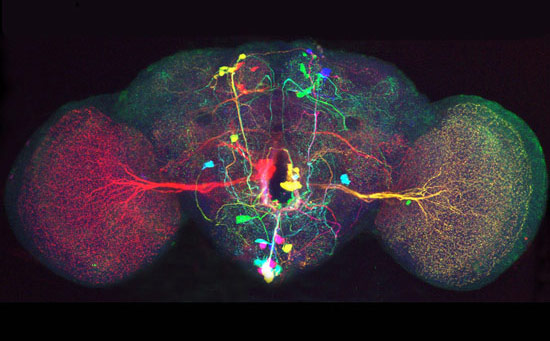 Hot wires: Marking each neuron with a different color creates a clear and stunning picture of complex circuits.

Four years after scientists devised a way to paint individual mouse neurons in different colors, two independent groups have adapted the technique for use in the fruit fly. Both papers, replete with stunning images of fly neurons, appeared 6 February in Nature Methods1,2.

Traditional staining techniques follow the path of one neuron. But sorting out any one neuron from several others stained the same color is tricky, akin to unsnarling a single wire from a box full of tangled ones. The new technique marks each neuron with a different color, creating a clear picture of complex circuits.

These radiant fly brain maps could be particularly helpful for studying genes linked to autism. Some studies indicate that the disorder may be the result of impaired connections between neurons.

Fruit flies are an ideal species for genetic manipulation: they reproduce in days, and carry an estimated 75 percent of known human disease genes. For example, Drosophila models of fragile X syndrome, a genetic disease related to autism, have shown that the fragile X gene alters sleeping patterns.

Earlier this year, researchers from Taiwan created an atlas of Drosophila brain connections by using computer algorithms to combine pictures of individual neurons from 16,000 different flies.

In contrast, the two new studies trace the paths of many different neurons simultaneously in the same tissue preparation.

The researchers first insert genes for fluorescent proteins of different colors — green, red and blue — into embryonic flies. During development, each neuron expresses copies of these proteins in different ratios, ultimately producing cells of different shades. For instance, one neuron might express red and blue proteins equally, making a purple color, whereas another expresses green and blue, resulting in cyan.

The molecular dyes cover the entire length of a neuron. One of the papers traced motor neurons over a relatively long distance — from a brain bulb sitting underneath the esophagus to the proboscis muscles of the insect’s mouth.