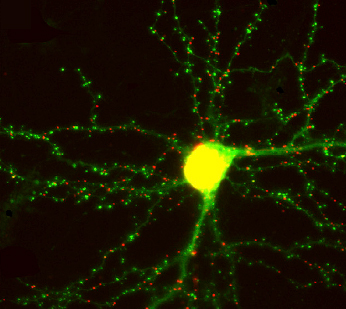 Researchers have found a new way to light up proteins in living cells, revealing the connections between neurons, according to a study published 19 June in Neuron1.

In the 1990s, a fluorescent protein found in jellyfish revolutionized cell biology. Researchers learned to fuse this molecule, called green fluorescent protein, or GFP, to almost any other protein, allowing them to watch as that protein goes about its business in the cell.

But there are limitations to this technique. GFP is bulky and may interfere with its partner protein’s function. And expressing these fusions can throw the levels of the target protein out of whack. The more traditional route for in-cell imaging, using antibodies that bind to the protein of interest, involves killing the cell to allow the antibody to enter.

In the new study, researchers designed antibody-like proteins, dubbed FingRs, that are fused to GFP or another fluorescent molecule, and that are made by the cell itself. Researchers can engineer live cells, or even animals, to express these fusions, which bind to a target protein but otherwise do not permanently alter it in any way.

For FingRs to work properly, they cannot be more numerous than their target protein, as their unbound fluorescence would drown out the signal from their bound counterparts. This hurdle hampered earlier versions of the new approach.

In the study, the researchers fused FingRs to a protein that regulates the FingR’s own expression. As long as a FingR is bound to a protein, the regulatory region on the FingR is kept away from DNA. FingRs that are unbound may travel to the nucleus and shut down production of more molecules.

The researchers built a library of trillions of potential FingRs. They then screened for those that bind to one of two proteins that sit at the receiving ends of neuronal junctions, or synapses: PSD-95, a marker of synapses that receive activating signals, and gephyrin, which is present at synapses that dampen neuronal activity.

Neurons expressing these two FingRs are peppered with fluorescent dots, each indicating a synapse with another neuron.

The researchers also engineered mice to express these FingRs and were able to glimpse PSD-95 in the brain of a live 7-week-old mouse. Expressing FingRs in live mice may reveal how experience changes the type and number of neuronal junctions, the researchers say.