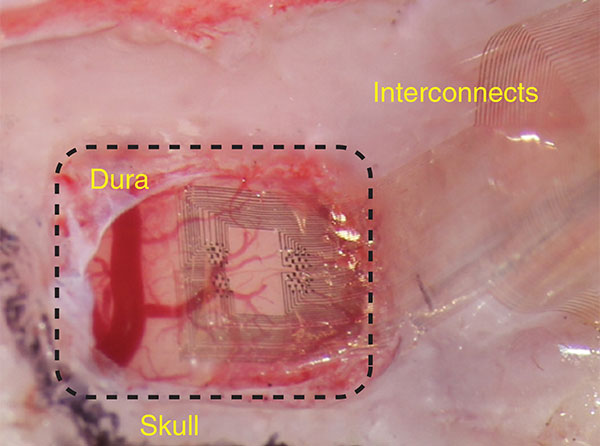 Perfect fit: The recording device’s metal components are visible as it lies on the surface of a rat’s brain.

An ultra-thin and flexible electrode array can record brain signaling without disturbing the underlying tissue, reports a paper published 22 December in Nature Neuroscience1.

The device, NeuroGrid, records the electrical impulses, called action potentials, that neurons use to communicate. These impulses may be disrupted in autism.

Traditional devices used to record brain signaling, such as the Utah array, consist of a metal chip studded with brain-penetrating platinum electrodes. The penetration damages tissue, however, and can interfere with signaling patterns. NeuroGrid hugs the surface of the brain without penetrating it, and can record signals up to 200 micrometers into the tissue.

The electrodes in NeuroGrid are made from flexible polymers rather than silicon, allowing the device to conform to the curves of the brain. Threads of platinum and gold add structure and serve as an interface between the polymer electrodes and electronic parts farther downstream of the brain.

To test the device, the researchers implanted a 256-electrode NeuroGrid onto the cortex, or outer layer of the brain, in 10 rats. In another three rats, they surgically planted the device on the hippocampus — a curved brain structure that plays a role in memory.

The researchers recorded brain signals in the rats for several days while the rats performed normal activities in their cages. Using a silicon-based probe to record signals independently, they determined that NeuroGrid is comparable to traditional arrays for detecting signals in several classes of neurons below the brain surface.

The custom-made device can cover large surface areas, such as the entire outer surface of a rodent’s brain or multiple areas on the outer surface of the human brain. Researchers can also fold the array and thread it through the fluid-filled ventricles of the brain to access deeper structures that are out of reach for conventional surface arrays.

NeuroGrid’s biggest limitation is its ability to process the flood of signaling data, the researchers say. Future advances in high-speed electronics and data processing could allow the device to cover larger areas and reveal large-scale neuron activity patterns.