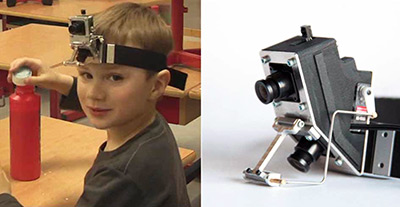 Director’s cut: The WearCam, a device with two cameras, records where children with autism look while playing.

A lightweight eye-tracking system allows researchers to record, every 40 milliseconds, the shifts in gaze that naturally occur during playtime, reports a study published 20 November in Frontiers in Psychology1.

Children with autism often avoid people’s eyes. The unobtrusive WearCam may help researchers uncover the subtleties of this behavior, for example recording whether a child is looking at a person’s face or down at his hands2.

The device, which weighs less than half a pound, has two cameras, one pointing forward and the second facing downward.

The bottom camera’s view also captures a mirror on the device that reflects a child’s eyes, providing another way for researchers to follow the child’s gaze.

The camera’s two recording areas overlap slightly so that researchers can chart an unbroken line of vision.

In the study, 14 children with autism aged 2 to 11 years and 17 controls, aged 3 to 6 years, took turns blowing soap bubbles and molding Play-Doh with an adult.

These findings support the idea that children with autism have difficulty relying on facial expressions to recognize social cues. They may also have delays in processing speech and integrating it with visual cues.