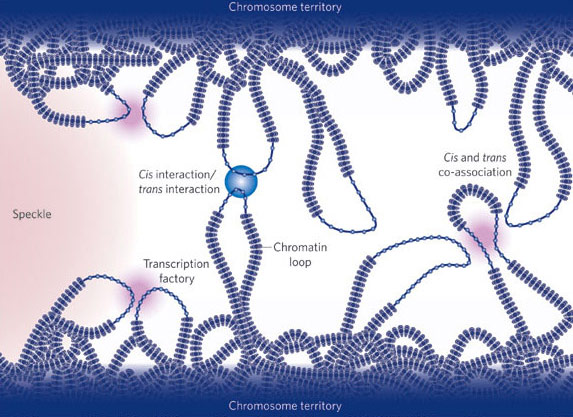 Click to enlarge image Nat. Neurosci. Remote control: Genetic variants associated with autism can affect the expression of genes that are either nearby (in cis) or remote (in trans).

Identifying genetic variants that affect the expression of other genes can enhance traditional gene association analyses and highlight candidate risk factors for autism, according to a study published 16 May in Molecular Autism1.

Genome-wide association studies (GWAS) rely on a statistical analysis to link a single nucleotide alteration in a DNA base pair with the likelihood of having a disorder. In this approach, researchers scan entire genomes to identify candidate genes, but must include thousands of participants for the conclusions to be statistically meaningful.

In the new study, researchers considered whether a single nucleotide polymorphism (SNP) is in a brain expression quantitative trait locus, dubbed eQTL. These loci influence the regulation of both nearby genes (in cis) and those in more distant regions of the genome (in trans), expressed in the brain.

The researchers looked at the top candidates from a 2010 study to investigate the association between one million SNPs and 1,558 families that have at least one member with autism and are part of the Autism Genome Project2.

SNPs associated with autism in this study are significantly more likely to be eQTLs than those not linked to the disorder, the new study found. This association is true only for eQTLs that influence gene expression in brain tissue, not in blood cells, the study also found.

Overall, the study identified 256 eQTL SNPs that influence the expression of 140 different genes. As many as 31 SNPs linked to autism affect the expression of one gene, SLC25A12, which functions in the mitochondria, the powerhouse of the cell. Studies have linked this gene to autism, and found more of the protein in postmortem brains from individuals with autism than in those from controls3.

Nine eQTLs influence the expression of PANX2 and three regulate PANX1, the study found. These genes are expressed together in the hippocampus, a brain region involved in learning and memory, of the developing brain. PANX2 is adjacent to the 22q13.3 chromosomal region, which, when deleted, leads to Phelan-McDermid syndrome and autism.