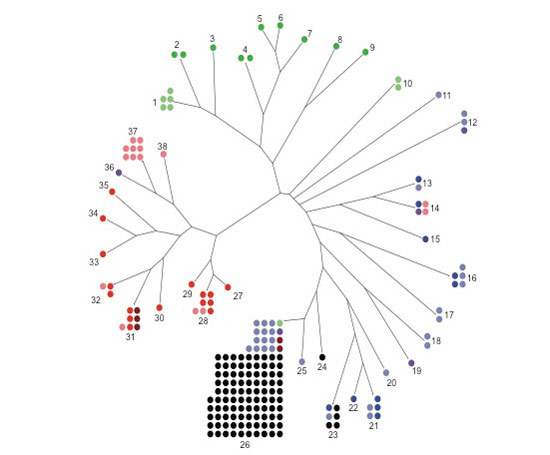 Family tree: Mice used in most research labs are primarily derived from just one subspecies of Mus musculus.

A new online database that compiles genomic sequence information for 162 mouse strains shows that classical laboratory strains have limited genetic diversity, according to a report published 29 May in Nature Genetics1.

The new tool, called the Mouse Phylogeny Viewer, allows researchers to select mouse strains with the genetic background appropriate for their experiments. A study published earlier this year showed that the genetic background of a particular strain can influence the effect of mutations on behavior, underscoring the importance of accurate reference genomes.

Mice are natural models for human genetic diseases because their DNA is similar to that of humans and is easy to manipulate in the laboratory setting. But years of inbreeding have also rendered them unnaturally identical genetically, making them poor models for heterogeneous genetic disorders such as autism.

Even for heterogeneous traits, however, “mice can be good models if you know what you’re doing,” says Fernando Pardo-Manuel de Villena, associate professor of genetics at the University of North Carolina-Chapel Hill and lead author on the study. It’s important to document each of the variants that, when combined, can lead to behavioral changes, he says.

In the new study, researchers sequenced the genomes of 36 new wild-caught mice that belong to the three natural subspecies of Mus musculus, the species widely used for research purposes. They also sequenced 62 so-called ‘wild-derived’ lab strains, believed to be direct descendants of wild mice from each of the three sub-species.

The researchers then examined the genomes of 100 inbred lab strains, which are believed to be hybrids of the three subspecies.

Looking at thousands of single nucleotide polymorphisms in the 36 wild-caught mice, the researchers identified genetic variants that are unique to each subspecies. They then used these to trace the relative genetic contribution of each subspecies to the lab strains.

They found that, on average, 94 percent of the genome of each inbred lab strain derives from a single sub-species, Mus musculus domesticus. The inbred strains the researchers analyzed are also more similar to one another than previously believed.

The new genomic database will allow other scientists to choose the most appropriate reference genomic sequence for their lab strain instead of relying on pedigrees, and the genetic background most suitable for their research.

The researchers plan to update the database to include copy number variations — duplications and deletions of regions of DNA.