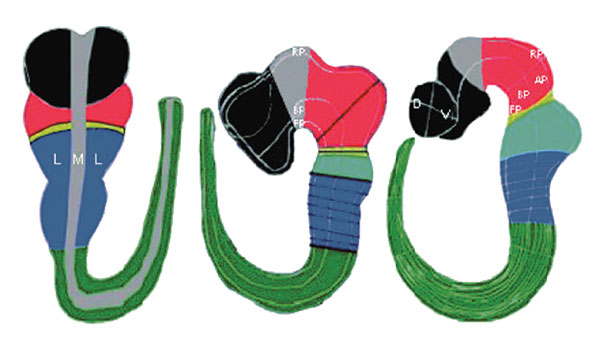 The resource holds information on 145 gene interactions so far in the embryonic mouse brain and spinal cord. Each entry includes links to published work and information about the type of interaction.For instance, an interaction is ‘direct’ if a gene encodes a protein that activates or blocks another gene’s transcription. It is ‘indirect’ if the gene activates a gene or a signaling cascade that affects the other gene.

Existing databases, such as the Allen Brain Atlas and the Mouse Genome Informatics Gene Expression Database, map patterns of gene expression in the developing mouse brain. But they offer little information about how the genes influence each other.

The new database provides snapshots of gene interactions when mouse embryos are8.5, 10.5 and 12.5 days old. During that four-day period, a symphony of gene expression segments the brain into specialized regions.

Most of the genes currently logged in the database are expressed at the boundary between the midbrain and hindbrain.This area in people gives rise to neurons that are involved in Parkinson’s disease, drug addiction and various mental disorders, such as depression.