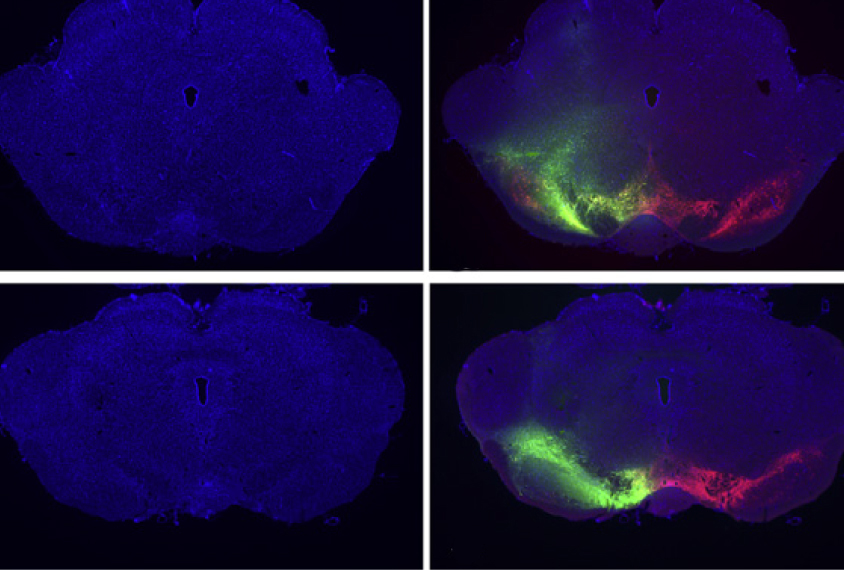 On target: A gene-editing system (green) homes in on specific cells (red) in the midbrain of a rat.

New versions of the DNA editor CRISPR enable scientists to turn off specific genes in rats, detect mutations in human tissue and delete segments of the genome.

Rat models of autism are popular due to the animals’ sophisticated social behaviors. But the rat genome is complex, so gene-editing tools for rats have lagged behind those for mice. A set of advances offers CRISPR a way into the rat genome.

The researchers first engineered rats to have DNA that is susceptible to CRISPR’s molecular knife, called CAS9, in only certain neurons. They targeted neurons that use the neurotransmitter dopamine and govern reward and movement. They also modified CAS9 so that it is more specific and less apt to edit arbitrary DNA sequences.

The team then created viruses carrying ‘guide’ molecules (RNAs) that tell CAS9 where in the genome to make edits. They injected these viruses along with the CRISPR-CAS9 complex into the brains of the rats. Together, the molecules turned off a gene for an enzyme in dopamine neurons.

The approach, described in April in Neuron, could easily be adapted to edit genes in other types of neurons in rats, the researchers say.

A novel sensor uses CRISPR to detect mutations in human blood or other tissue2.

Clinical tests for specific mutations are often time-consuming and expensive, because they require amplifying (creating many copies of) a person’s genome. This step enables the amount of DNA to reach detectable levels.

In the new work, researchers developed a chip that uses CRISPR to detect mutations in unamplified DNA within 15 minutes.

The chip is a 9-square-millimeter carbon lattice called graphene that sits between two electrodes. This configuration produces an electric current. To test a blood or tissue sample, a technician affixes to the lattice two CRISPR components: the enzyme CAS9, which cuts DNA, and an RNA molecule that guides the enzyme to the DNA sequence containing the target mutation.

If the DNA sequence is in the sample, it binds to the RNA and CAS9. The enzyme then changes shape, altering the current. This produces a signal on a hand-held reader, indicating the presence of the mutation.

The researchers used the chip to detect mutations that cause Duchenne muscular dystrophy in the blood and skin of men with the condition. Users can search for a different mutation by swapping out the RNA guide, the researchers reported in March in Nature Biomedical Engineering.

A new version of CRISPR deletes long stretches of DNA rather than cutting it at a specific spot3. Researchers could use this tool to recreate and study DNA deletions linked to autism.

Instead of using CAS9, the tool uses two DNA-cutting enzymes called CASCADE and CAS3 that come from a bacterium called Thermobifida fusca. Together, the enzymes delete DNA segments.

The researchers modified both enzymes to function at human body temperature, about 37 degrees Celsius. (The enzymes’ operating temperature is otherwise 55 degrees C.) The new editing tool made deletions ranging from a few hundred to 100,000 DNA bases in human cells.

The method may ultimately have a clinical use — erasing harmful mutations in people, the researchers reported in April in Molecular Cell.