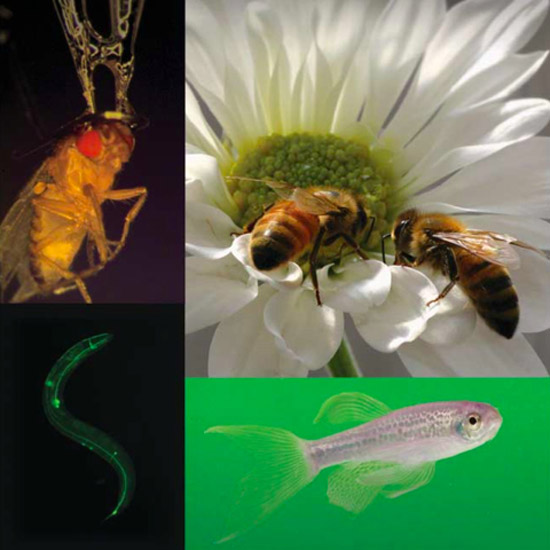 Among animal models of autism, the mouse reigns supreme: Scientists have manipulated dozens of autism risk genes in the furry critters.

But the biggest findings in autism may well come from tinier brains.

In a review published 30 March in Molecular Psychiatry, a group of Australian researchers argues that flies, bees, worms and fish have much to offer psychiatric research.

Even the most primitive nervous systems share some important features with ours. Synapses in the worm Caenorhabditis elegans, for instance, relay chemical messages using the same neurotransmitters we do. The layout of various brain regions in humans and zebrafish is also remarkably similar.

Obviously, these organisms don’t display behavioral hallmarks of psychiatric diseases — imagine measuring the social anxiety of a worm with autism, or hallucinations in a fish with schizophrenia. Still, they do show some explicit behaviors that could be informative.

For example, honeybees are dependent on the social structure of their hive; when they are deprived of those interactions, their brain does not wire properly and their memory declines.

These models offer two major advantages over rodents. First, their biology is simpler. C. elegans has just 302 neurons — compared with 4 million in a mouse or 100 billion in a human — and scientists have already worked out the position, shape and connectivity of each one.

Second, they allow for faster, more efficient experimental manipulations. For example, the fruit fly carries roughly 75 percent of all known human disease genes, but because of its ten-day generation time, its genome is infinitely easier to tinker with. Likewise, because zebrafish embryos are transparent, scientists can quickly see structural effects of specific genetic changes.

Some autism researchers have already taken advantage of these model systems. In February, researchers reported that honeybee brains surge with the autism-linked neurexin and neuroligin proteins during learning. Other groups have shown that FMRP, the protein missing in fragile X, controls sleep behaviors in fruit flies.

The reviewers urge scientists to do more “species hopping” — synthesizing findings from many organisms of varying complexity.