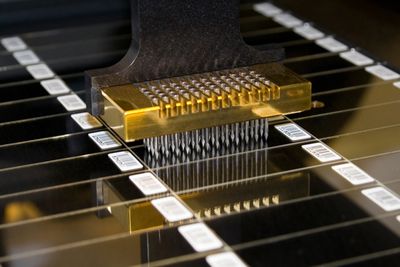 First test: Because of cost considerations, using a chip to identify chromosomal abnormalities is not yet routine practice for autism diagnosis.

Screening the genome for small chromosomal abnormalities may identify potential genetic causes of autism or intellectual disability in 16 percent of children tested, according to a study published 24 May in the European Journal of Paediatric Neurology1.

The technique, called chromosome microarray analysis (CMA), should be the first step in any attempt to find the cause of a developmental disorder, the researchers say.

Duplications or deletions of chromosomal regions, called copy number variations (CNVs), are more common in people who have autism or other neurodevelopmental disorders than in controls. Clinicians have pushed for years for CNV identification with CMA to be standard practice in diagnosing autism, but because of cost considerations (in the U.S., the test is not usually covered by insurance) it is still not routine.

Other methods include looking at chromosomes under the microscope and probing specific genes known to lead to autism-like symptoms, such as the gene that underlies fragile X syndrome.

In the new study, researchers looked at 349 people who have autism, intellectual disability, developmental delay or unusual facial features. The standard screening tests described above had not flagged any genetic abnormalities in these individuals. CMA identified CNVs in 77 of the individuals.

Some CNVs are present among the general population and are not necessarily harmful. The researchers designated a CNV as ‘potentially causative’ if it was already known to be associated with a disorder, encompassed genes with a known neurological function, arose spontaneously in the affected individual or was inherited from affected parents.