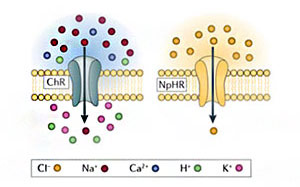 Bright response: Beams of light can open ion channels engineered into membranes, turning neuronal activity on or off.

An innovative technique that uses waves of light to silence brain signaling in live animals can affect subsequent neuronal signals, according to a study published 24 June in Nature Neuroscience1.

Optogenetics activates or silences neurons by opening light-sensitive channels engineered into the cells. The technique allows researchers to manipulate neuronal activity on cue and in a subset of neurons in live animals, and it has been used to study mouse models of autism.

Researchers employ different types of ion channels in optogenetics, and which they choose can influence neurons in different ways. Neurons typically maintain a negative charge inside the cell. A sudden shift toward a positive charge leads to a neuronal signal that propagates down the cell, called an action potential.

GABA quiets neurons by opening chloride channels, so the researchers speculate that opening the channels in neurons with high chloride levels leads to an outflow of these ions, triggering activity.

Scientists should consider this effect when interpreting optogenetics results and choosing which channel to use in designing experiments, the researchers say. This could be especially relevant for autism research, as studies have linked an imbalance in GABA signaling with the disorder.