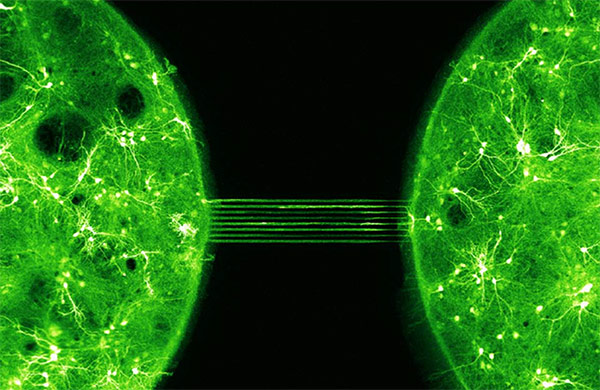 Reaching out: Neurons nestled in tiny wells within chips send projections to each other through thin channels.

Inexpensive ‘chips’ imprinted with tiny wells and channels provide a glimpse of neurons communicating in culture. The chips, described 22 April in PLOS One, may aid in the study of disorders such as autism in which altered brain signaling plays a central role1.

Researchers traditionally study interactions between cultured neurons using electrode-studded chips. Neurons grow atop the electrodes, which stimulate cells and record the ensuing electrical response in nearby cells.But the electrodes and amplifiers needed to read the signals are expensive and tricky to set up.

The new system directs neuronal growth using microfluidics — small channels and wells etched into thin wafers of polymer and glass. Light stimulates neurons in the wells and fluorescent microscopes are used to detect bursts of activity as groups of neurons communicate. Many labs already have fluorescent microscopes, and the chips themselves are cheap enough to be disposable.

Each chip contains five pairs of tiny chambers, with each pair connected by a series of channels.The channels are just wide enough to accommodate axons — the thin projections that shuttle electrical signals to neuronal junctions, or synapses. As the neurons mature in culture, their axons grow through the channels toward the neurons in the paired chamber.

The researchers used the chips to study embryonic rat neurons that they had engineered to fire in response to blue light. They treated the neurons with a fluorescent dye that glows in the presence of calcium, which floods into the cells when the neurons fire.When stimulated, the light-sensitive neurons send signals to their sister cells across the channels, causing them to fire — and glow under the microscope.

The researchers turned some of the channels into one-way streets by widening one opening and tapering the other. Axons tend to enter through the wide end and exit through the narrow end. These channels mimic instances in the nervous system in which signals travel mostly in one direction. Researchers could use a combination of one-way and two-way channels to build neural networks mirroring those in brain.

The system may help researchers understand how neurons in people with certain disorders communicate differently than typical neurons do. It could also be used to test the effects of drugs on neuronal connections.