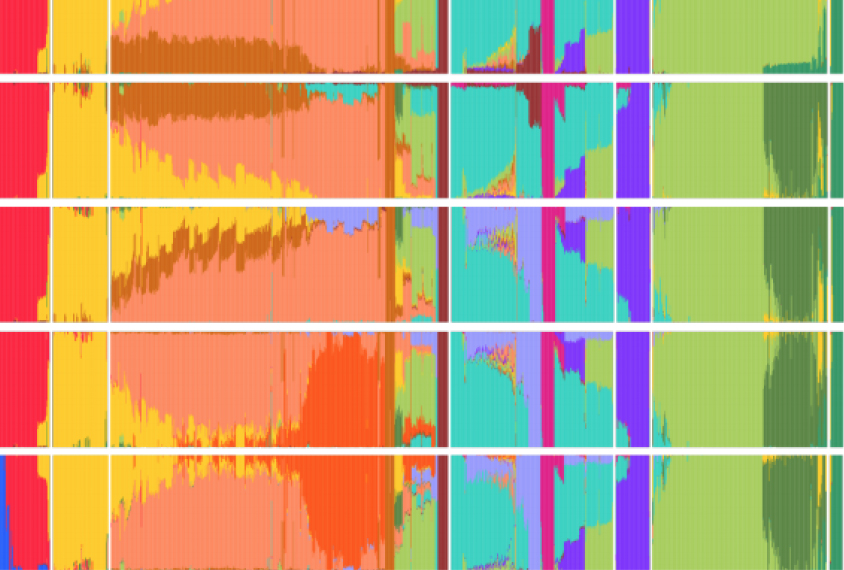 Ancient associations: People from Asia have high genetic diversity due to historical mixing with many ethnic groups, represented here by different colors. Each horizontal strip includes one more geographical region than the strip above it.

A new resource details the genetic diversity of people throughout Asia1. Data from this understudied population could enhance scientists’ understanding of genetic conditions such as autism.

Genetic studies have mostly used sequence data from people of European descent. Extrapolating the studies’ findings to non-Europeans is problematic, however, because of the genetic differences among ethnic groups.

Over the past 16 years, researchers have begun to address the diversity problem by sequencing the genomes of people from Korea, Japan and China. The new project, called GenomeAsia 100K, is the first to sequence individuals throughout the continent.

In a pilot study, researchers collected data from more than 1,000 people across Asia. They added nearly 600 sequences from previous studies, for a total of 1,739 genomes representing 64 Asian countries.

The genomes together harbor nearly 340,000 novel variants. Some are mutant forms of genes with known links to genetic conditions. For example, the researchers found 13 new variants in genes associated with cancer. In all, 23 percent of the variants in the dataset that affect proteins were not present in public genetic databases. The study was published in December in Nature.

The nonprofit running the sequencing project has published the sequences online as reference genomes. Researchers can compare the genomes of individuals who have genetic conditions with the references to identify variants associated with the conditions.

For example, the researchers were able to halve the previous number of candidate variants for diabetes in an Indian cohort. They also discovered that Asia has sizable ‘founder populations’ — small ancestral groups that separated from larger ones — in both urban and remote tribal areas. Rare genetic conditions that occur only when a person carries two copies of a variant are more common in founder groups.

The consortium aims to sequence 100,000 Asian genomes. They plan to start collecting participants’ medical data along with their genetic sequences.