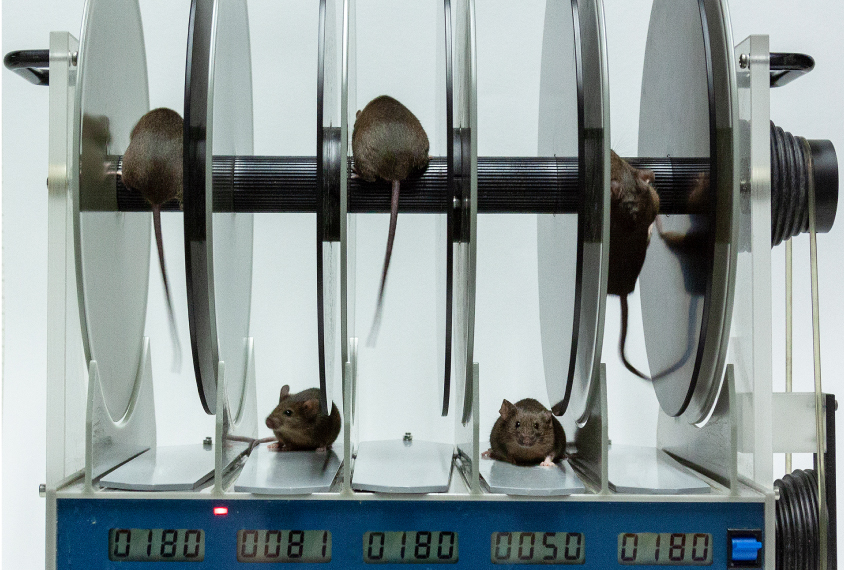 Hold on tight: Mice with motor deficits struggle to stay on top of a rotating rod.

A new protocol enables researchers to rigorously test drugs for Angelman syndrome in mice1. The guidelines boost the chances that drugs that work in mice will also work in people.

“A lot of people are interested in testing drugs for Angelman syndrome,” says lead researcher Ype Elgersma, professor of neuroscience at Erasmus University in Rotterdam, the Netherlands. “How do we know that what we are looking at is something that is solid and is not just a one-time thing?”

Over three years, Elgersma’s team catalogued the behaviors of more than 200 male and female mice with various genetic pedigrees. They examined the mice using five tests for behaviors that are atypical in Angelman mice.

A motor test involves balancing on a spinning rod; in an anxiety assay, scientists see if mice dare to explore an open area; a test for repetitive behavior involves burying marbles; nest building indicates a mouse’s natural drive to find shelter; and how long the mice swim before giving up can reveal rodent ‘depression.’

The order of the tests is important, because taking certain tests can affect performance on the others. The forced-swim test comes last, for example, because it tends to create the most anxiety. Once the order is set, the key is keeping it the same each time, Elgersma says.

Elgersma’s team repeated the test battery eight times on roughly 30 mice each time. Five people performed the test series, with one of these experimenters repeating it four times, to determine how the results vary. In total, the team tested 111 Angelman mutant mice and 120 controls.

After charting the variability in behavior, the researchers calculated the number of mice needed to conclude that the mice do or do not show a deficit on each test. The marble-burying test requires only 7 mice in each group to confirm whether the mice have repetitive behaviors; at the other extreme, the open-field test requires at least 21 mice per group.

Echo chamber: Anxious mice cling to the sides of a chamber, avoiding the center.

Sex does not alter the results of the behavioral tests substantially, nor does the laboratory from which a mouse originates. A mouse’s genetic background does influence its behaviors, however.

The researchers used this behavioral battery on Angelman mice exposed to minocycline, an antibiotic, or levodopa, a Parkinson’s disease drug. Neither drug significantly alters mouse behavior — a finding in line with those from clinical trials of the drugs for Angelman syndrome, but counter to those from earlier mouse studies of the compounds.

The earlier mouse studies showed motor benefits from the drugs, but they may have involved too few animals. For example, levodopa was said to improve balance in groups of six mice. The new study suggests that each group needs at least 14 mice to give consistent results.