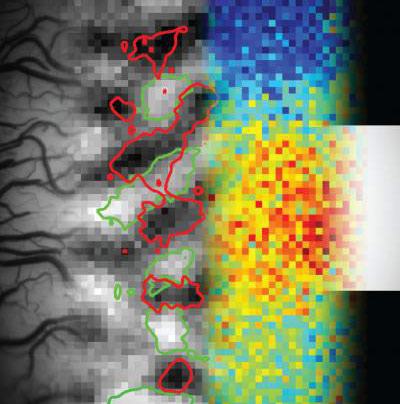 Jancke/RUB Activity wave: When an animal looks at a graphical image (black and white lines), its brain processes orientation (red shapes) and movement (color dots) at the same time.

The brain collects information on an object’s orientation and its direction and speed all at the same time, according to a study published 15 April in NeuroImage.

Researchers have shown this multitasking for the first time by combining traditional imaging, fluorescent dyes that follow the real-time activity of neurons, and sophisticated computational techniques1.

The visual cortex receives complex information and parses it out to other brain regions. Understanding this process could help researchers identify what goes awry in autism, which is often characterized by deficits in how people direct their attention and process competing streams of information.

When people see an image, such as a checkerboard pattern, cells in the visual cortex recreate an exact representation of the object. This results in subtle changes in light transmission in these neurons or in the surrounding cells. A traditional technique, called optical imaging, can capture the patterns in a photograph.

In the new study, researchers showed moving images of gratings — alternating horizontal or vertical black and white lines — to anesthetized cats. Using optical imaging, they were able to photograph the brain’s response to the direction and orientation of these lines.

Adding a dye that stains neurons and fluoresces when they transmit signals shows a wave of activity that reflects the gratings’ movement.

For example, a strip of fluorescence travels downwards in the brain at the same speed and direction as that of a white line in the grating.

The researchers were able to detect this subtle signal using a computational technique — called singular value decomposition analysis — that breaks down complex information into individual components. The technique allows them to remove competing information, such as the animals’ heartbeat, which could drown out the signal.