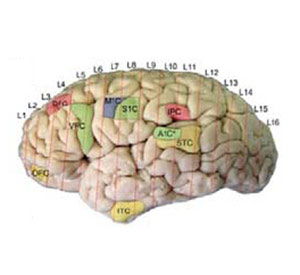 Gray’s anatomy: Researchers are tracking the expression of genes in 16 regions of the human brain.

Gray’s anatomy: Researchers are tracking the expression of genes in 16 regions of the human brain.

Researchers have charted the expression of more than 15,000 brain genes across 15 stages of development, spanning from 4 weeks post-conception to more than 60 years of age, they reported 27 October in Nature1.

The researchers also looked in detail at the expression of genes associated with various neurological disorders. This list includes the autism-linked genes  CNTNAP2, MET and NLGN4X, which is located on the X chromosome. For example, CNTNAP2, variations in which are associated with language delay and autism, appears in several regions of the cortex in infancy, when children are learning to speak. The results are available in an online resource called the Human Brain Transcriptome.

The data include gene expression and sequence information from 16 brain regions in 57 postmortem brains. Most genes are expressed variably across different brain regions and at different stages of development, the study found. The bulk of these changes occur before birth, confirming that this is a critical period in development.

The researchers also identified several genes, including NLGN4X, that are expressed at different levels, or with a different sequence, in male brains than in female brains. This type of differential expression could account for the gender bias in autism, the researchers say.

By tracking the overall patterns of expression, the researchers grouped together clusters of genes that may function in the same brain pathways. For example, genes related to the development of neurons cluster together into one set that includes FOXG1, a gene linked to Rett syndrome and intellectual disability.

Data from the new study are also included in BrainSpan, another online atlas of gene expression patterns across the developing brain. BrainSpan is a collaboration between researchers at the Allen Institute for Brain Science, which developed the Allen Brain Atlas, and four universities.