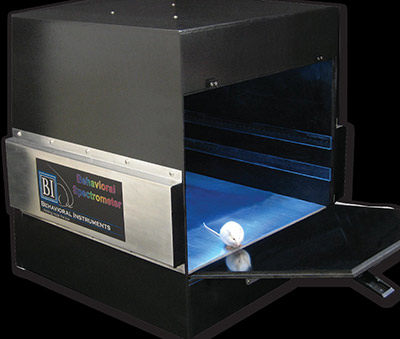 Sensitive room: Infrared sensors record a mouse’s movements, which are matched to a database of 23 possible behaviors.

A new tracking system automatically logs and scores mouse behavior as well as a human observer does, according to a paper published 31 December 2013 in Journal of Neuroscience Methods1. The tool could make assessing treatments for disorders such as autism faster and less expensive.

Called the Behavioral Spectrometer, the device consists of a large chamber in which the mice can move, and is equipped with vibration sensors in the floor, infrared sensors in the walls and a miniature video camera in the ceiling.

When a mouse is in the chamber, custom software analyzes the animal’s movements as recorded by the sensors and camera. Then it matches the movements against a database of 23 possible behaviors, such as rearing up on hind legs or sniffing. Currently, the gold standard is for researchers to manually code the behaviors while watching videos of the mice.

First, the researchers had the device and two human scorers analyze the behavior of 70 control mice and found that the device accurately matches the human scoring.

Then, to see whether the Behavioral Spectrometer can capture known differences between mouse breeds, including those that model human disorders, the researchers used it to analyze BTBR mice, known for their repetitive grooming behavior. These mice are often used to study autism.

The researchers placed 12 BTBR mice and 12 controls one at a time in a separate clear plastic box with woodchip bedding in the chamber, and used the software to observe them for ten minutes.

The device found that the BTBR mice groom more than controls, as reported in prior studies. They also spend much less time rearing up on their hind paws to look around than controls do, a difference that hasn’t been reported before but that may relate to BTBR mice’s relative lack of interest in their surroundings.

The researchers also used the tool to assess the behavior of mice undergoing pain or stress. The system’s scores were the same for a given mouse tested multiple times and consistent across groups. The tool was also able to score every second of the time a mouse was in the box, while researchers could manage only 56 percent of the time.

The researchers suggest that in addition to automating behavioral scoring, the device could be used to establish signatures for certain disorders. It could then assess the effect of any prospective treatments.