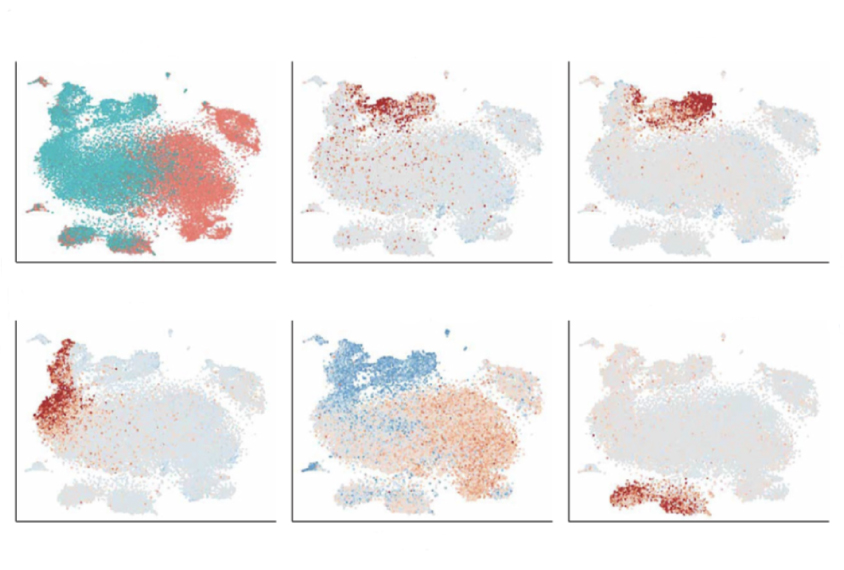 Colorful clusters: Each cell type in the fetal brain shows a distinct pattern of gene expression.

An online resource reveals all major cell types in the developing human brain during mid-gestation, the period in which autism is thought to arise1.

The researchers used a method called Drop-seq to sequence the RNA of single cells, which identifies all active genes in the cell. Each type of cell has a specific set of RNAs.

Other researchers have analyzed several hundred or a few thousand cells in the developing human brain, but those numbers are too small to spot the rarest cell types. Advances in Drop-seq enabled the researchers to sequence more cells.

The researchers profiled 40,000 single cells from the brains of 17- to 18-week-old fetuses. The researchers dissected the cerebral cortex into four ‘zones’ and analyzed them separately to ascertain the approximate locations of the cells.

They identified 16 cell types after sequencing 3,000 to 5,000 genes for each type. Among these types are cells transitioning from early neural progenitors to newborn neurons. The rarest are microglia, immune cells in the brain: 50 microglia turned up in the hunt.

The researchers identified cell types likely to underlie autism by looking for those that have active genes linked to the condition. Some of the cell types they flagged were already known to play a role in autism. But others were not: These include cells that maintain the blood-brain barrier and those that build the fatty sheaths around neurons.

The data are all available via an online browser called the CoDEx Viewer that enables scientists to explore expression patterns for any gene. The work appeared 4 September in Neuron.