The resource could help researchers identify the most appropriate models for studying autism at different stages of brain maturation. Gene expression in progenitor cells, which develop into neurons, closely matches that of human brain organoids — lab-grown renditions of the real thing — early on, for example, but later aligns more with that of cells in mice, according to the study.

“It’s just a cautionary tale that you have to be careful about choosing your experimental model,” says lead investigator Arnold Kriegstein, professor of neurology at the University of California, San Francisco.

In people, progenitor cells called radial glia generate neurons in what becomes the cerebral cortex during the first six months of fetal growth. But how these radial glia develop and mature has been unclear, partly due to a dearth of tissue samples from the first weeks of gestation.

In the new work, Kriegstein and his colleagues analyzed gene expression patterns in individual cells from 12 fetal brains ranging in age from 6 to 10 weeks post-conception. They looked at 289,000 cells across the brains, including 59,000 from the cortex and nearby structures.

Cortical progenitor cells fall into nine groups based on gene expression, the team found, indicating that these cells are more varied than was previously recognized. Even the youngest tissue samples contained some neurons, suggesting that the creation of cortical neurons begins early on. 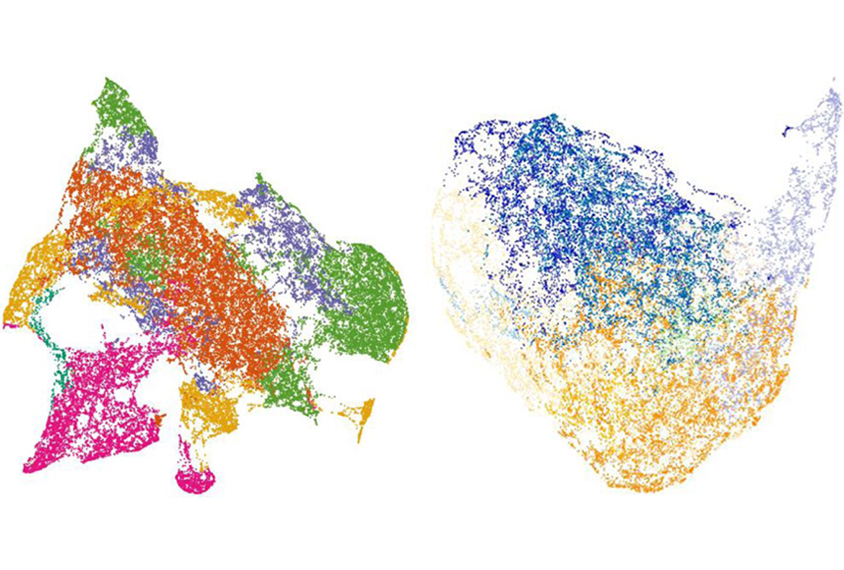 The autism-linked gene MEFC2, which helps neurons mature and assemble into the cortex’s characteristic layers, was highly expressed in the younger samples. In older tissue from previous studies, it peaked again around 14 weeks, suggesting it has multiple roles.

The researchers also built ‘family trees’ linking cells across different periods of development to better understand how progenitor cells differentiate. Many of the genes that appear to regulate this process are linked to autism and other neuropsychiatric conditions, such as schizophrenia, the researchers found.

The team compared their samples with gene expression patterns in 9- and 10-day old mouse embryos — about halfway through gestation — and with a set of brain organoids developed from four human stem-cell lines.

Two clusters of cells found in early developmental stages in people are not present in mice, the researchers found. The organoids do have these cells but lack others that are expressed later in both mice and people.

The findings were published in Nature Neuroscience in March.