Researchers usually image spheroids in 2D, slicing them into thin sections or separating cells to examine them using confocal microscopy. Both methods can destroy aspects of a 3D spheroid’s internal structure, organization and cellular processes.

In the new work, researchers optimized a 3D imaging technique called airy-beam light-sheet microscopy for studying brain spheroids, providing one of the first 3D views of spheroids’ inner structures, including rosettes. These formations are thought to recapitulate the neural tube, which gives rise to the brain and spinal cord in a developing embryo. Studies have shown that rosettes form differently in spheroids derived from the cells of people with neurodevelopmental conditions, such as fragile X syndrome and autism.

The team first made cortical spheroids, which mimic the forebrain, using stem cells derived from three neurotypical people. They grew the spheroids for 7, 17 or 30 days and then used antibody markers to stain certain cell types and proteins that line the inside of rosettes. 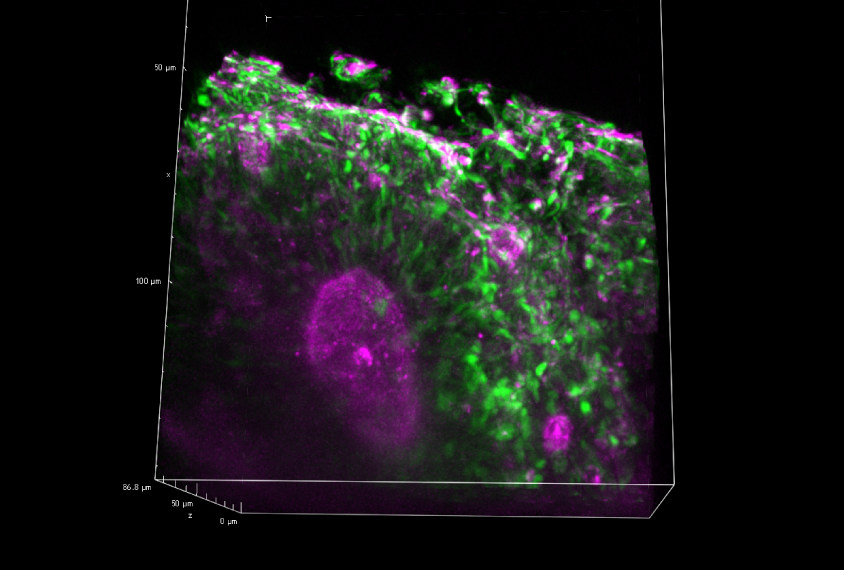 Rosette range: By imaging spheroids in 3D, researchers can see structures called rosettes, in which immature brain cells (green) surround a cavity (pink), of a variety of shapes and sizes.

The confocal microscope showed only about 100 microns into the intact spheroids, too shallow to see internal structures, the team reported in January in Molecular Autism. Imaging thin slices revealed the typical organization of rosettes: a ring of cells surrounding a circular cavity, or lumen.

In a few rare instances, the lumens appeared to have a tapered, tube-like shape. “We realized that we were seeing them from the side-on view,” says Deepak Srivastava, reader in molecular neuroscience at King’s College London in the United Kingdom, who led the work. “It was just pure luck that we cut [them] through the middle.”

By contrast, the light-sheet microscope revealed many rosettes of various shapes and sizes, including larger, rounder ones and smaller, tube-like ones. The approach also enabled the researchers to image 600 cubic microns of tissue at once — enough to capture part of large spheroids or the entirety of small ones.

Antibody markers were not clearly visible throughout, however, probably because they cannot penetrate deep into the spheroids and because fats in cells interfere with light transmission, the researchers say.

To overcome these problems, the team treated spheroids with a chemical concoction that rids them of fat and renders them transparent. They used another set of chemicals to make the spheroids more permeable and give antibodies more time to infiltrate the tissue.

Imaging the treated spheroids revealed the arrangements of rosettes, even in the deepest regions, more clearly. Spheroids contained rosette lumens of a variety of sizes, including one spheroid with a single large lumen, reminiscent of the formation of the neural tube.

These findings bolster the notion that brain spheroids mimic key developmental processes, the researchers say. The imaging approach could be used to examine rosettes in spheroids made with cells from people with autism, and to better understand processes that underlie the condition.