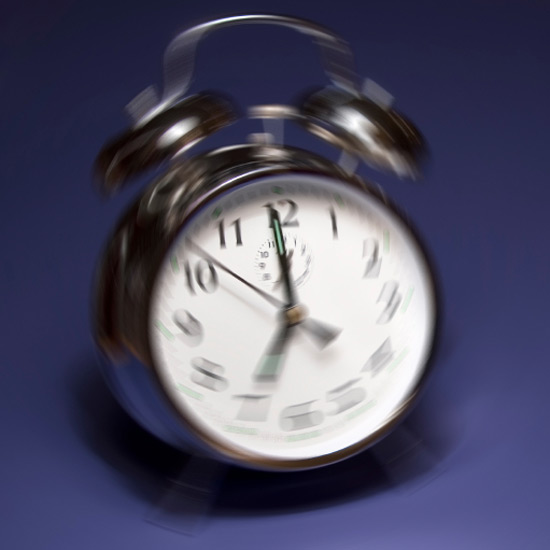 Troubled times: Anecdotal reports suggest that people with autism have trouble parsing the order of events.

Individuals with autism have trouble perceiving the passage of time, and pairing sights and sounds that happen simultaneously, according to two new studies.

These timing deficits could underlie some of the cognitive impairments that characterize the disorder, the researchers say. For example, communication problems could stem from tiny delays in the perception of speech, or from imprecise pairing of spoken words and gestures.

“If a baby’s sense of time [and order of events] and how long to wait before responding is disrupted in any way, that’s going to interfere with the smooth dialogue that goes on between babies and their caregivers,” notes lead investigator Dermot Bowler, professor of psychology at City University London in the U.K. “This is certainly what you see in children with autism.”

Only a handful of empirical studies have investigated these timing errors in a rigorous manner, however. Some have found no evidence for timing impairments in people with autism, whereas others have found significant deficits1,2.

In the May issue of the Journal of Autism and Developmental Disorders, Bowler and colleagues report that adults with autism fail to accurately gauge the duration of sounds3.

The researchers tested 20 high-functioning adults with autism and 20 healthy controls. Participants first heard one of seven tones, varying in length from 0.5 seconds to 4.1 seconds. They then heard a second tone and were asked to click a button when they thought it matched the length of the first.

Compared with controls, individuals with autism are less accurate at assessing the length of the tone, the study found. They also tend to overestimate short tones and underestimate long tones, and their responses vary across a broader range compared with those of the control group.

One possible interpretation of these results is that individuals with autism construct a rolling average of all the time intervals they’ve experienced across trials. A bias toward the average time interval could indicate impairments in memory, says lead investigator Jonathan Martin, clinical psychologist at the University of Birmingham in the U.K.

The researchers plan to repeat the experiments using tones that last up to 14 seconds. Increasingly poor performance with longer time durations would suggest a memory-based problem, whereas difficulties that are consistent with shorter-interval trials would indicate that the problems are timing-based, he says.

In addition to problems in judging the passage of time, children with autism tend to show abnormal responses to sight and sound synchrony.

For instance, a study published last year in Nature found that children with autism are drawn to movements and sounds that are perfectly synchronized, such as a pat-a-cake game.

In June, researchers reported that children with autism are more likely than those without the disorder to perceive asynchronous events — such as the sight of a bouncing ball followed by the sound of it — as if they are happening simultaneously4.

In the study, Mark Wallace and colleagues at Vanderbilt University in Nashville investigated the ‘binding window,’ the period in which visual and auditory events occur closely enough that the brain attributes them to the same event.

The researchers gave 29 children with autism and 17 healthy controls a test called the ‘flash-beep illusion.’ Participants saw a flash accompanied by two beeps and were asked to report the number of flashes they perceived. Typically, this pairing results in the illusion of two flashes.

An enlarged binding window is analogous to the effect of a poorly dubbed movie in which a person’s lip movements are not in sync with speech sounds.

“You can imagine why the world would be so over-stimulating and confusing if you didn’t integrate things as precisely as other people do,” says Lorraine Bahrick, professor of psychology at Florida International University, who was not involved with the study. This could help explain why some people with autism are overly sensitive to sensory stimuli, such as loud sounds or being touched, which could in turn lead to abnormal social interactions, she says.

A large binding window could also contribute to some of the repetitive behaviors that are characteristic of autism, Bahrick says. By creating predictable cycles of sensory feedback, repetitive behaviors may allow an individual to compensate for overstimulation, she says.

Wallace’s work suggests that training exercises can narrow the binding window in people with autism.

His team has trained healthy participants to bind sights and sounds 40 percent more precisely by presenting them with sounds and flashes separated by various intervals and providing feedback on their accuracy5. “We may be able to ameliorate some of the problems associated with autism, at least those attributable to sensory processing issues,” says Wallace, professor of psychiatry and hearing and speech sciences at Vanderbilt University.

The new research does not identify mechanisms underlying the timing problems in autism, however. “I think these [studies] are exciting and provocative, but they lend themselves to trying to tease apart the stages of those processes,” notes Timothy Roberts, professor of radiology at Children’s Hospital of Philadelphia, who was not involved in either study.

Using magnetoencephalography (MEG) — an imaging technique that is especially sensitive to split-second changes in brain activity — his team has found that children with autism have a slight delay in processing sounds compared with typical individuals.

Roberts has preliminary evidence that the delays could be caused by inadequate insulation of white matter — the nerve fibers that transmit signals between cells6. “If the highway isn’t conducting signals fast, then you could have some problems with encoding and the time it takes to process things,” Roberts says.