The next hot topic in autism research? Immune cells 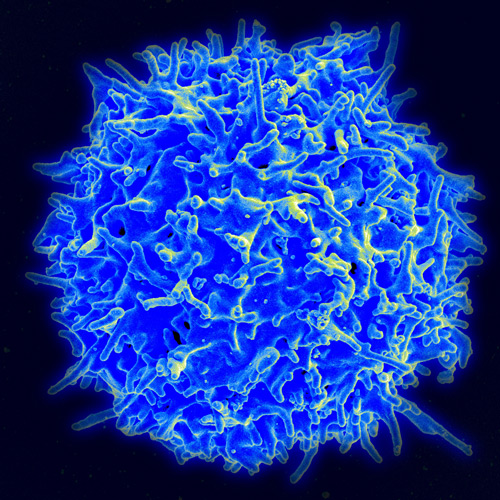 Peripheral problem: White blood cells known as T cells circulate in the bloodstream but do not enter the brain.

Some cases of autism may result from glitches in immune cells in the blood: This provocative idea stems from a series of unpublished mouse studies presented yesterday to a standing-room-only crowd at the 2014 Society for Neuroscience annual meeting in Washington, D.C.

Mice lacking white blood cells known as T cells show abnormal social behaviors, excessive brain connectivity and hints of brain inflammation, according to a slew of new studies from Jonathan Kipnis’ team at the University of Virginia. All of these patterns have also been observed in people with autism.

The findings are part of a new wave of research bucking the dogma that the immune and nervous systems don’t interact with each other. “We’re seeing more and more of it and it’s totally exciting,” says Melissa Bauman, assistant professor of psychiatry and behavioral sciences at the University of California, Davis, who was not involved in the new work. “At this point, we’re all going to have to stop being surprised.”

Many studies have found evidence of immune problems in people with autism. For example, postmortem brain tissue from individuals with the disorder contains abnormal microglia, immune cells that reside only in the brain and serve as markers of inflammation. Because this tissue comes from people of all ages, Filiano notes, “what this really suggests is chronic inflammation in these patients.”

In one of the new experiments, Filiano looked at mice that do not have T cells because of a genetic mutation. Unlike controls, these so-called ‘SCID mice’ do not show a preference for interacting with other mice over objects, he found.

He and his colleagues then injected the SCID mice with thymocytes — progenitor cells from the thymus that turn into T cells — harvested from normal mice. Four weeks after the transplant, SCID mice no longer show the abnormal social behaviors, Filiano says.

These results are particularly intriguing because T cells do not enter the brain. They aggregate around the meninges — layers of tissue that enclose the brain and spinal cord — and release chemicals that relay messages to the brain. Presumably, the loss of these chemical interactions in SCID mice somehow affects their social behaviors.

In another experiment, Filiano’s team induced social deficits in normal mice by giving them a multiple sclerosis drug that prevents T cells from moving into the meninges.

“I think it’s pretty surprising, especially thinking about the meninges,” says Lindsay Hayes, a postdoctoral fellow in Akira Sawa’s laboratory at Johns Hopkins University in Baltimore, who was not involved with the work. “I mean, for such a small population of cells [in the meninges] to have a role in such a complex behavior? That’s crazy.”

The researchers theorize that absent or malfunctioning T cells in the meninges affects microglia in the brain. In support of that idea, they found that microglia in the SCID mice are abnormally shaped, with less branching than normal. This could be a sign of inflammation, though more experiments are needed to say for sure, Filiano says.

To test more directly whether microglia are involved in social behavior, Kipnis’ team looked at a different kind of mice — an inbred model called BTBR that is known to be asocial. After four weeks of consuming a drug that depletes microglia, the animals’ social behaviors improved. As soon as they stopped taking the drug, the microglia repopulated and the social deficits returned. This suggests that microglia are somehow involved in the animals’ social deficits, although exactly how is as yet unclear.

Finally, the researchers also found a link between T cells and brain connectivity. Using a technique called resting-state functional connectivity, they found that SCID mice are hyperconnected in autism-related regions, including the prefrontal cortex and the insula. This is similar to connectivity patterns reported in the brains of people with autism, Filiano says.

Pulling all of the data together, the researchers propose that absent or impaired T cells may cause inflammation in the brain and ultimately affect social behaviors.

Others note that there are still many unknowns in the proposed mechanism. “I think this is a T-cell story. Whether T cells are required for the microglial [effects], that’s a different question altogether,” says Dimitrios Davalos, staff research scientist at the Gladstone Institutes at the University of California, San Francisco.

Kipnis readily agrees. “We have no clue how it works, but it’s there,” he says.

Kipnis says he hopes to find a subset of children with autism who have distinctly abnormal immune profiles of their blood. If T cells turn out to be a robust biomarker, it could have significant treatment implications.