The case for copy number variations in autism 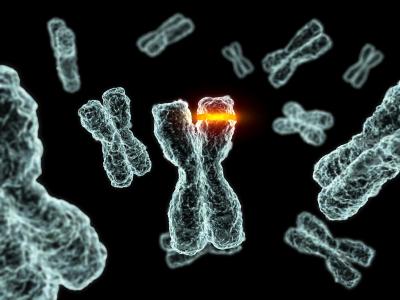 Strong evidence: Copy number variations are the most common cause of autism identified so far.

Following a series of papers in the past two years, what seems irrefutable is that copy number variations ― in which a particular stretch of DNA is either deleted or duplicated ― are important in autism1,2.

Already, “CNVs are the most common cause of autism that we can identify today, by far,” notes Arthur Beaudet, a geneticist at the Baylor College of Medicine in Houston.

What confronts researchers now is uncovering when and how CNVs influence autism. Do these variations cause the disease directly by altering key genes, or indirectly, in combination with other distant genes, or are they coincidental observations with no link to the disease?

The answer seems to be all of the above.

“In some cases these CNVs are causing autism; in some they are adding to its complexity; and in some they are incidental,” says Stephen Scherer, director of the Center for Applied Genomics at The Hospital for Sick Children in Toronto. “We need to figure out which are which.”

In February, Scherer published the latest CNV paper identifying 277 CNVs in 427 unrelated individuals with autism3. In 27 of these patients, the CNVs are de novo, meaning that they appear in children with autism, but not in their healthy parents.

Among the key findings in that paper are de novo CNVs on chromosome 16, at the same spot previously identified by a report published in January by Mark Daly and his colleagues. 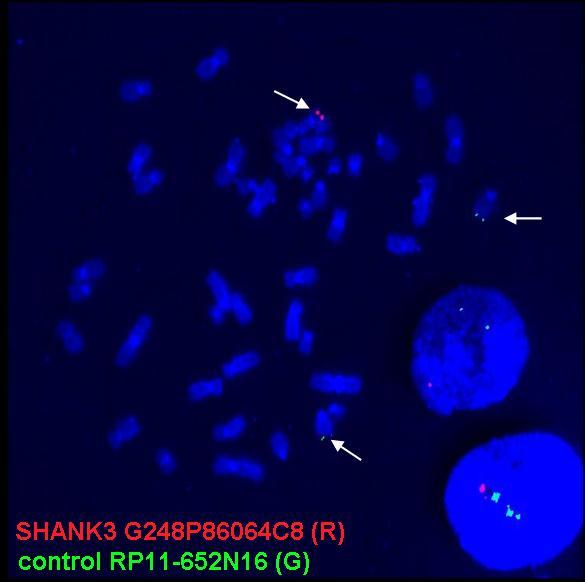 A CNV on chromosome 22q encompassing the SHANK3 gene in an autistic individual. The two green dots mark chromosome 22 but only one of these carries a red dot (SHANK3). The chromosome 22 with no red dot has a SHANK3 CNV deletion.

A CNV on chromosome 22q encompassing the SHANK3 gene in an individual with autism. The two green dots mark chromosome 22 but only one of these carries a red dot (SHANK3). The chromosome 22 with no red dot has a SHANK3 CNV deletion.

Different teams have documented a few of these ‘hot spots’ on the genome where CNVs are seen in up to one percent of people with autism ― and virtually never in those without it.

There are intriguing suggestions that CNVs uncovered at these hot spots may not be autism-specific. For example, three of the patients found to have a duplication on chromosome 16 in the January paper have been diagnosed with developmental delay and not autism.

A laundry list of other CNVs have only been identified in a single, individual with autism, making it difficult to tag them as a cause of the disease.

“[When] people publish big lists of regions, there’s an implicit thing that if my kid has this, it’s going to have autism,” says Evan Eichler, a Howard Hughes Medical Institute investigator at the University of Washington in Seattle. But, “there’s no proof,” he notes.

“Screening 5,000 families instead of 500 would really be of huge benefit,” says Jonathan Sebat of the Cold Spring Harbor Laboratory in New York. Sebat and Mike Wigler propelled the field forward last year with a a high-profile list of de novo CNVs4. Their team is gearing up to scan 1,500 families with just one affected child ― in whom de novo mutations are more likely to turn up.

Scherer’s group is screening the most promising CNVs from their February paper ― those they identified in two or more unrelated people, or that overlap with a gene already suspected in autism ― in a larger sample of nearly 1,000 patients.

The team is drilling down to find smaller changes: deletions or duplications shorter than 1,000 bases in length. But the answers are unlikely to be simple.

For instance, Scherer found one 277 kilobase deletion at the tip of chromosome 22 in a girl with autism. Another team had reported in 20065 that mutations in this region cause autism in several families by crippling one of the body’s two copies of the gene coding for SHANK3, a protein that is crucial for healthy communication between brain cells. In the same girl, however, Scherer also found something new: a duplication of a chunk of genome on chromosome 20 that is five times as big as the deletion on chromosome 22.

If the chromosome 22 deletion hadn’t already been documented ― and if Scherer’s study hadn’t resolved down to 277 kilobases ― it would have been easy to assume that the chromosome 20 duplication was entirely responsible for the girl’s autism.

As it stands, however, “probably some of the genes that are being duplicated on chromosome 20 are adding complexity to her autism,” Scherer says, noting that the girl’s symptoms include epilepsy and abnormal physical features.

The fact that the same hot spot has been implicated in different cognitive disorders adds to the complexity. A given CNV “is not always associated just with autism,” says Eichler. “That’s what messing with people’s minds.”

Eichler raises another issue that researchers need to resolve: nomenclature.

Copy number variations are a subset of a bigger category of mutations called structural variations. These include other changes such as inversions and translocations of large chunks of sequence, which don’t lead to a net gain or loss in sequence as deletions and duplications do, but can still have significant consequences for cognitive function6.

“Copy number is not as good a term,” says Eichler. “Structural variation includes inversion and translocation, [and is] a much more encompassing term.”