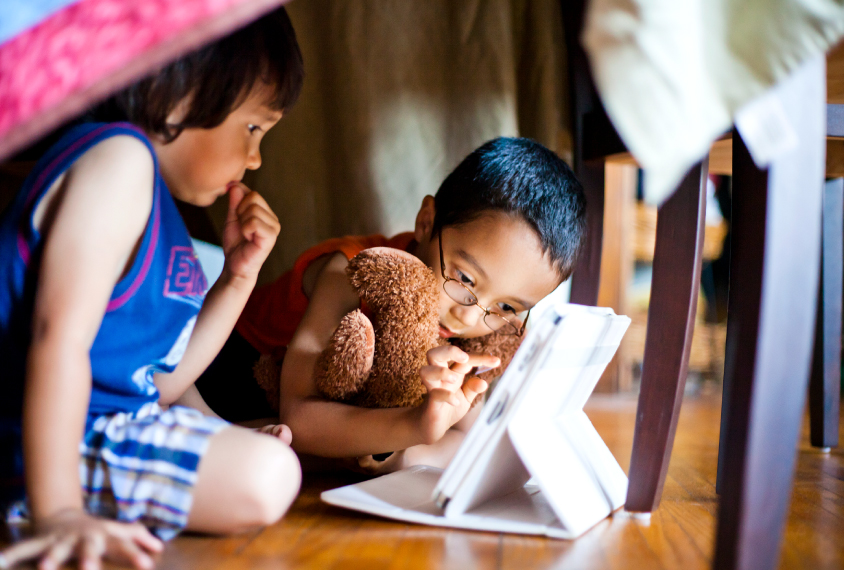 Atypical development of the brain’s visual system in autistic 6-month-olds points to the influence of inherited factors on the condition, according to a new study.

“There’s something about the development of the visual system that’s different in autism very early in development,” says study investigator Jessica Girault, assistant professor of psychiatry at the University of North Carolina at Chapel Hill. “This may set off a fundamental cascade of differences that arise after that.”

Autism is highly heritable: Genetic differences explain between 64 and 85 percent of the variability in someone’s propensity for it. Autism-linked traits tend to run in families, and autistic children’s younger siblings, or ‘baby sibs,’ are about 14 times more likely to be diagnosed with autism than are children from the general population. The more intense the autistic child’s traits, the more likely their baby sib is to be diagnosed with autism, Girault and her colleagues reported in 2020.

What’s more, high levels of autism traits in an autistic child track with increased brain volume and cortical surface area in their baby sib later diagnosed with the condition, the new study shows. Those effects were strongest in vision-related brain regions across multiple measures.

The results begin to shed light on why infants later diagnosed with autism have atypical social visual behaviors, such as a lack of interest in looking at other people’s eyes, “as early as we are able to measure them,” says Ami Klin, director of the Marcus Autism Center in Atlanta, Georgia, who was not involved in the new work.

The study, therefore, “puts a huge spotlight on the infancy period of a person’s life,” Klin says. “We need to go further back. We need to start from birth if we want to understand the pathogenesis of autism.”

Girault and her colleagues relied on structural brain scan data for 384 baby sibs, 89 of whom have autism, who participate in the Infant Brain Imaging Study. The team evaluated brain scan data from the baby sibs at 6, 12 and 24 months old, as well as the autism traits of 345 of these babies’ older siblings using a parent questionnaire called the Social Communication Questionnaire (SCQ). In Girault’s 2020 study, higher SCQ scores — indicating more autism-linked traits — tracked with a greater likelihood of autism in a younger sibling.

Differences in the older siblings’ SCQ scores explained 12.3 percent of the variance in brain volume in baby sibs later diagnosed with autism, at all three ages evaluated, and 16.8 percent of the variance in surface area at 24 months, the team found. At all three ages, the surface area of the occipital cortex — the back-most region of the brain, which processes visual stimuli — showed a particularly strong association with the older sibling’s SCQ score.

High SCQ scores in older siblings were linked to increased integrity of white-matter tracts associated with visual processing in 6-month-old babies later diagnosed with autism. And in functional MRI scans collected at that age, stronger autism traits were associated with a decreased measure of functional connectivity between the brain’s visual network and posterior frontoparietal network, and between the visual network and default mode network, which is activated during sleep or daydreaming.

The findings were published in the American Journal of Psychiatry in May.

The work highlights the interplay between genetics and environment — and how difficult it is to tease them apart, says Katarzyna Chawarska, professor of psychiatry at Yale University, who was not involved in the study.

Some of the study’s results “reflect what babies bring to the world and how their brains are maturing,” she says. In those who are later diagnosed with autism, genetic differences may lead to a visual system that is wired up in an atypical way from birth. But as soon as these babies begin to interact with their surroundings, she says, the environment also has a hand in how new connections are formed and strengthened.

“As they are interacting with the environment, some of the atypical features may diminish, or they might be replaced by some compensatory mechanisms” that obscure any differences, Chawarska says, which may explain why the genetic influence was strongest for the youngest children studied.

Those visual differences present from day one could also compound to have effects on how a child interacts with the world socially, Girault says. It’s a hypothesis that still needs to be tested, she says, but “that’s very much where we’re hoping to go next with some of this work — thinking about how to drill down on these findings.”

Girault and her colleagues plan to chart how visual processing differs for autistic and non-autistic children at the earliest ages to better grasp what typical and atypical development looks like, she says. They also plan to further investigate autistic sibling pairs, with the goal of better understanding the role of genetics in autism traits.