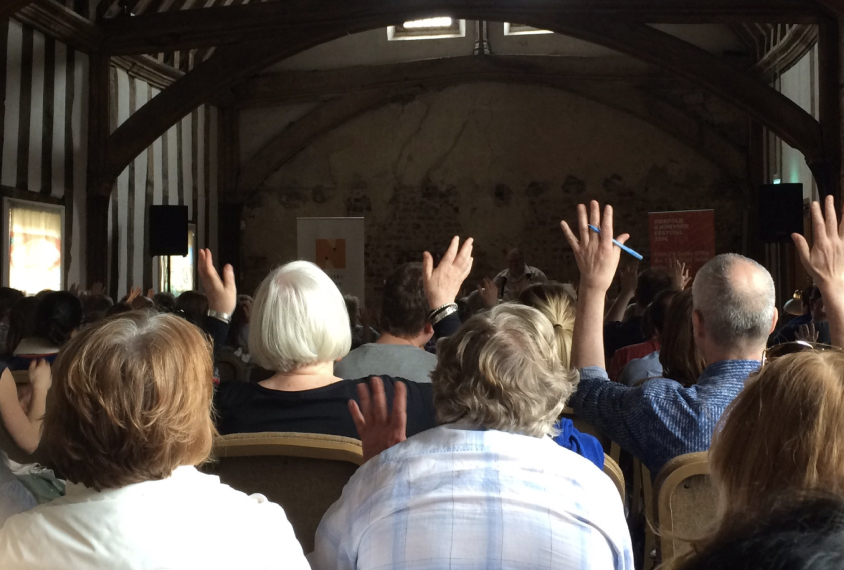 Clap flap: At the INSAR conference last year, attendees were encouraged to use ‘flappause’ (seen here at an unrelated meeting).

Courtesy of the National Centre for Writing

Autism’s largest scientific conference kicks off Wednesday in Montreal with a formidable challenge: pleasing its diverse mix of attendees, with their radically different agendas.

The International Society for Autism Research (INSAR) has inadvertently become the nexus of debate on autism’s most divisive issues, including the language scientists use to describe the condition and the research priorities they set. The conference is unique in that it has also increasingly attracted clinicians, autism advocates and people on the spectrum, including at least 100 scientists. “Those are changes to be proud of,” says John Elder Robison, INSAR board member and self-advocate.

But in their attempts to cater to this wide range of people, the organizers have made choices that displeased one group or another.

Last year, for example, they made overtures to the autistic community, including by adding sessions on social science, that irked many biologists. So this year, they padded the conference with more sessions on biology. Still, some biologists say they’ve soured on the conference enough to skip it entirely.

“I was going to go to INSAR, but I will cancel,” says neuroscientist Gaia Novarino, who served on an advisory committee charged with soliciting proposals for the conference. In the end, she says, there still aren’t enough basic science offerings to justify her attending. “I heard a lot of people are also not going for exactly the same issue.”

Those who want more social science, meanwhile, see the organizers as mistakenly pandering to the biologists.

“It is so strange that there was a big section of the research community as well as the autistic community who were pulling in one direction, and just at that moment the INSAR board went in the other direction,” says Sue Fletcher-Watson, director of the Salvesen Mindroom Research Centre at the University of Edinburgh in Scotland.

Last year, organizers tried to make the conference more inclusive for autistic attendees with sensory sensitivities. A quiet room provided respite from the hubbub of scientific talks, and attendees were encouraged to use ‘flappause’ — a silent form of appreciation that involves hand-flapping — instead of applause.

The move ignited protest from several scientists who said they use applause to gauge which work resonates most with audiences. It also changed the tone of the meeting, some researchers say.

“The flappause seemed to serve as a reminder of a political point of view that distracted some of the speakers from accurate reporting of their data,” says Catherine Lord, professor in residence of psychiatry and education at the University of California, Los Angeles.

The move may also have caused confusion or offense in some quarters. “Flappause was adapted from the deaf community but may have been misinterpreted [at INSAR] as a form of stimming,” says Alison Singer, INSAR public relations chair and president of the Autism Science Foundation.

Following last year’s complaints, “there is no mandate” for people to use flappause this year, says Joseph Buxbaum, INSAR program chair and director of the Seaver Autism Center for Research and Treatment in New York. “People can do whatever they’re comfortable with.”

Another point of confusion and disagreement is the language used to describe autism and people with the condition.

Some advocates bristle at terms such as ‘people with autism,’ ‘at risk’ and ‘disease.’ But scientists routinely use these terms when describing their work, which sparked strong emotional reactions among some of last year’s attendees.

The organizers are not taking a position on this issue one way or the other.

“We are going to announce at this year’s conference that people should be sensitive about the language that they use, but we’re not insisting on particular terms because there isn’t a clear consensus,” says Simon Baron-Cohen, INSAR president and director of the Autism Research Center at the University of Cambridge in the United Kingdom.

The organizers have taken a strong stance in support of basic research, however — a notable departure from meetings over the past few years. Jason Lerch, whose team scans mouse brains, is scheduled to deliver one of the coveted keynote addresses.

The shift is in part a response to a decision by the conference’s donors, including the Simons Foundation (Spectrum’s parent organization), to cover travel expenses and accommodations for speakers.

In a perfect illustration of INSAR’s challenges, some say these efforts are too thin to make a difference.

“There was a desire to change a bit, or to include more molecular work at INSAR,” says Novarino. But the selection committee received fewer basic science submissions than they had anticipated. Not only that — some strong proposals were rejected, compounding the problem, says Novarino. “I would love to know, what is the source of resistance?”

A previous version of this article incorrectly implied that the Simons Foundation chose which INSAR speakers would receive funds to cover their travel expenses.