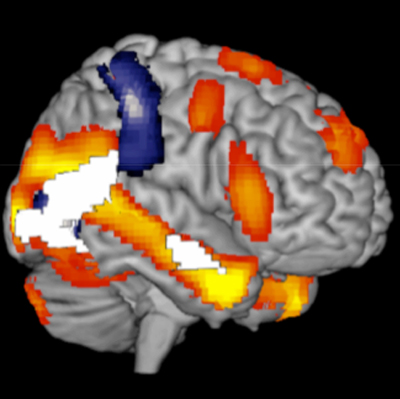 The approach, presented Sunday at the 2013 Society for Neuroscience annual meeting in San Diego, uses Frith-Happé animations to distinguish brain areas that handle different types of social perception in order to study autism.

“There is a huge need to learn about the neural correlates of that illness,” says Carolin Moessnang, a postdoctoral researcher in Heike Tost’s lab at the Central Institute for Mental Health and Heidelberg University in Germany, who presented the work. “We want to use the technique of fMRI to see whether we find a deviating behavior of the brain,” Moessnang says.

People with autism have trouble imagining what goes on in the minds of others. Frith-Happé animations show encounters between a pair of triangles to test for a person’s ability to label the triangles’ movements as being ‘random,’ ‘goal-directed’ (such as dancing), or guided by desires or feelings (such as coaxing).

Studies of theory of mind that rely on interviews or questionnaires to score the perceptions of the participants, however, say little about what is actually going on in the brain in autism.

At the same time, brain imaging studies may not use tests that clearly ask participants to distinguish between examples of goal-directed behaviors and those for which an internal state of mind could be inferred.

For this study, the researchers combined the two approaches to see whether the different Frith-Happé animations activate different areas of the brain.

The researchers plan to use the method on a large scale in EU-AIMS, a Europe-wide consortium of scientists, patient groups and pharmaceutical companies that aims to develop drugs for autism.

In this pilot study, the researchers showed each video of a Frith-Happé animation to 46 adult male and female volunteers without autism while they underwent an fMRI scan. They asked the participants to categorize each interaction and rate the triangles’ feelings. They then tried to correlate the answers with the brain regions that lit up as the participants looked at the videos.

Three regions — the bilateral temporoparietal junction, the right anterior middle temporal gyrus and the right amygdala —clearly and reliably show activity when participants are distinguishing between the three types of interactions, the study found.

“The goal you have with the autism children is to find the difference in the network involved in autism,” Moessnang says. “This is a roadmap to the theory of mind network.”