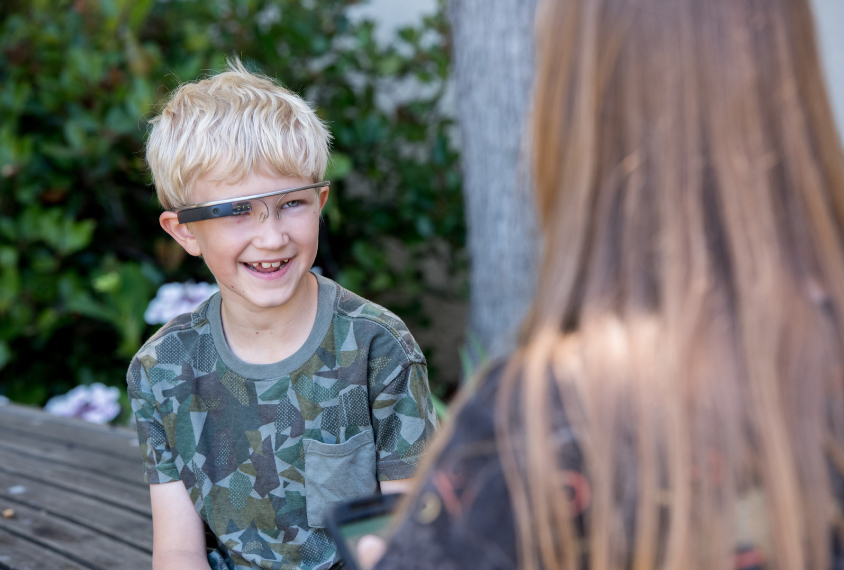 Look out: Wearing new high-tech glasses may or may not boost social skills in autistic children.

A California-based healthcare company is poised to market its ‘Superpower Glass,’ high-tech eyeglasses that use software intended to improve autistic children’s social skills.

The company, Cognoa, announced in February that the U.S. Food and Drug Administration had granted the therapy ‘breakthrough status,’ meaning it can move quickly through the agency’s approval process. And an open-label clinical trial published in March suggests that the technology temporarily improved the social skills of a group of 40 autistic children1.

But some experts, including several who declined to speak on the record, say the trial was poorly designed and the effects small and temporary.

“This is basically science’s use as a marketing exercise,” says Jonathan Green, professor of child and adolescent psychiatry at the University of Manchester in the United Kingdom. “This isn’t how science is supposed to be done for the benefit of patients.”

The technology is based on Google Glass, a wearable smart device that resembles eyeglasses. It is designed to help children with autism detect others’ emotions by showing them emojis that mirror the others’ expressions.

The company received an exclusive license to commercialize the therapy from Stanford University, where its founder, Dennis Wall, is associate professor of pediatrics, psychiatry and biomedical data sciences. Wall and Cognoa’s work on a phone app designed to diagnose autism was greeted with similar skepticism, as Spectrum reported last year. Stanford University and Cognoa representatives, as well as Wall and his colleagues, declined to comment for this article.

But according to Cognoa’s website, company officials are working steadily to commercialize the therapy.

Wall and his colleagues recruited 71 autistic children aged 6 to 12 who live near the Stanford campus. All of the participants were already receiving a standard autism therapy called applied behavioral analysis (ABA).

The researchers asked 40 of the participants to use Superpower Glass in four 20-minute sessions each week for six weeks. The children were to play games or otherwise interact with a parent three times a week and with their ABA therapist once a week.

The glasses use computer-vision technology to track faces. The system is synched to a smartphone, which runs an emotion-recognition application. When a child’s parent or therapist displays an emotion, an emoji depicting that emotion appears on the glasses. A robotic voice also names the emotion.

According to parent reports, autistic children who used the glasses improved more on a social-skills portion of the Vineland Adaptive Behavior Scales than did controls. But there was no significant difference between the two groups on another test of social skills, and on two emotion-recognition tests. And six weeks after the treatment ended, the children’s social improvements on the Vineland had disappeared.

“It’s hard to know how much to make of it,” says James Rehg, professor of interactive computing at the Georgia Institute of Technology in Atlanta. “It doesn’t look like at this point it was a slam dunk.”

Rehg says he would have more faith in the treatment if the effects had lasted or if the children had shown improvement on the other tests.

One reason the results are weak may be that the treatment targets the wrong problem, some experts say: Autistic children may not have trouble recognizing emotions.

“Most kids do know how to do it; what they don’t understand is how to take the emotion from the context [they are in] and know what to do about it,” says Connie Kasari, professor of human development and psychology at the University of California, Los Angeles.

The results may also be compromised by the fact that 35 of the initial 71 participants dropped out — 19 before the treatment phase’s end and 16 before the end of the follow-up period. And those in the treatment group used the technology only for about half of the recommended time, on average.

These behaviors hint that users may not like the technology, Green says. Children may find the device uncomfortable, for example, or feel that it does not allow them to interact naturally with others.

A strong placebo effect may also have distorted the results, because parents knew whether their child was in the treatment group. Controls did not receive glasses and sham instructions, for instance, to disguise the groups.

“It’s possible that simply by parents seeing their children were wearing the glasses, that changed their perception of their child’s behavior,” says Rebecca Jones, assistant professor of neuroscience in psychiatry at Weill Cornell Medicine in New York. Jones has published work showing that simply participating in research influences parents’ responses, even if their children do not receive treatment.

Cognoa has raised more than $20 million in venture capital and has applied for a patent on the new therapy.