The dramatic backdrop to the 2015 International Meeting for Autism Research (IMFAR) — the mighty Wasatch Range — is the product of 20 million years of hemorrhaging fault lines, volcanic eruptions and the painfully slow march of ice and rock.

One might excuse some of the stakeholders at IMFAR for likening such geological history to the seemingly glacial pace of autism research. But tucked in those hills may lie a precious lesson about patience.

The opening keynote by an anthropologist, who encouraged attendees to think deeply about terminology, set the tone for a meeting that was as much about stepping back to revisit assumptions in the field as it was about moving forward.

The many families, advocates and individuals with autism who were invited to take part in IMFAR contributed to the tenor of the meeting. These individuals clearly appreciate the work autism researchers are doing, but it’s no secret that they have some gripes.

These include disappointment with the pace of progress despite the billions of dollars poured into the field over the years, with how personal information and results are shared with study participants, and with how researchers conceptualize the disorder — that is, if it even is one.

IMFAR 2015 provided many platforms for the community to air these concerns, provide their perspectives and ask scientists to clarify their views. To the researchers’ credit, in the exchanges I witnessed, they listened.

During a panel discussion, an autism advocate recounted the difficulties he faced as someone who had received a diagnosis at the age of 40. His story brought one of the field’s best-known theorists to tears.

If there is an overriding takeaway from IMFAR 2015, it has to be that a dialogue in which scientists engage directly and respectfully with those they seek to help can be incredibly productive.

Scientists talking to each other doesn’t hurt, either.

David Beversdorf, a neurologist at the University of Missouri, told me that one session made him appreciate the impact of current behavioral interventions in a new way. In the talk, Sally Rogers, an expert on early treatment of autism, showed how properly developed interventions can improve the daily lives of people with autism now — not at some point in the future.

Referring to Rogers, he said: “From those of us on the biomedical side, or at least from me, thank you!”

Beversdorf was also surprised by the scientific acumen of some of the non-scientists in attendance. “I was in a very technical session about neural biomarkers,” he told me while we were gathered for the IMFAR Twitter chat, “and a gentleman stood up during the Q&A and said, ‘I’m not a researcher, but …’ — and then went on to ask the most sophisticated question about electrophysiological signatures I’ve ever heard. And one I hadn’t thought of.”

Biomarkers — the elusive biological signatures of the disorder that researchers hope will lead to reliable targets for treatment — were a hot topic at the meeting. But consensus was hard to find. Every researcher’s pet candidate seemed to have at least five skeptics for every one attendee persuaded.

“I was surprised by how much discussion biomarkers could create,” Raphael Bernier, a neurobiologist at the University of Washington, told me.

During a happy hour organized by our Facebook discussion groupfor autism researchers, Brian O’Roak, assistant professor of molecular and medical genetics at Oregon Health & Science University, made a provocative suggestion. The best biomarker for autism isn’t brain waves or blood counts, he proposed, but the genome itself. 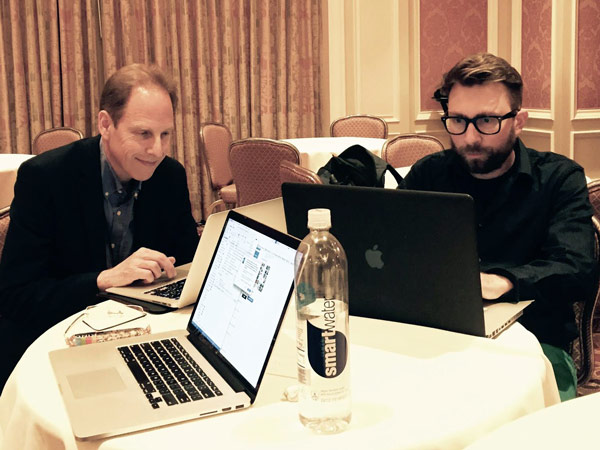 Ample exchange: Simon Baron-Cohen, professor of developmental psychopathology at the University of Cambridge, sits next to Alex Plank, founder of the autism advocacy website Wrong Planet, during an IMFAR Twitter chat organized by SFARI.org.

I was struck again this year by how much researchers are warming up to social media. Our Q&A Twitter chat on Friday afternoon included many scientists and clinicians, a few well-known self-advocates, and hundreds of others who chimed in remotely to debate some of the issues raised at the conference.

“I was introduced to Twitter during one of these SFARI.org chats,” James McPartland, director of the Yale Developmental Disabilities Clinic, told me during a break. “Now it is one of my primary means of tracking new manuscripts about autism.”

(For a full transcript of the Twitter chat, click here. A Storify version of the discussion, edited by P.F. Anderson, can befound here.)

On the final morning of the meeting, Jeremy Veenstra-VanderWeele, associate professor of psychiatry at Columbia University, offered several possible pathways for developing effective pharmacological treatments for people with autism.

None of them were a straight line.

One approach, he said, might be to target specific molecular problems. These drugs would likely provide enormous benefits, but to only select individuals. Another avenue might involve drugs that operate on a more systemic level. These medications might help a wider swath of those affected, but would likely be less effective.

To enhance the efficacy of any of these treatments, Veenstra-VanderWeele said, it is important to look for — what else? — biomarkers that could illuminate who is most likely to respond to each drug.

It is perhaps a difficult truth that unraveling autism will be a vexingly long haul, and that there will be no ‘silver bullet’ treatment that works for everyone. But with patience, there is hope.

“I think it takes time before we reach a critical mass of understanding to make real step changes,” Francesca Happé, INSAR’s outgoing president, told me over coffee.

The geologic process that shaped the Continental Divide included rapid and radical events that formed its peaks and U-shaped valleys. Autism research might be similarly nonlinear.

“It’s not that every new paper published adds incrementally to the welfare of people with autism,” Happé said. “But I think we’ll reach a tipping point over time, where we suddenly know that much more about the condition.”

And if that’s the case, I suspect bringing autism researchers of all stripes together to share ideas, think critically about each other’s work and engage with the community could help push the field to that critical fulcrum.