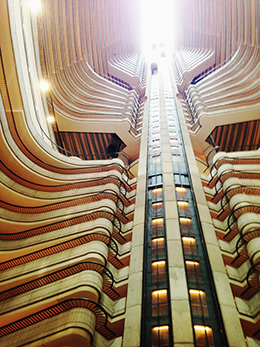 My final glass-elevator descent into the belly of the world’s second largest atrium at Atlanta’s Marriott Marquis — site of this year’s International Meeting for Autism Research (IMFAR) — gave me a bird’s-eye view of the hotel staff as they broke down the poster stands in the main conference hall.

The 50-floor trip also gave me a moment to reflect on some of the major themes addressed over the past several days.

One trend that dominated the presentations was a propensity for numbered lists. There were the five critical areas of focus Fred Volkmar outlined, the ten things IMFAR Advocate of the Year winner Peter Bell said researchers can do better, and the David Letterman-style ‘Top ten ways to make it harder for us to give you money,’ outlined by the Autism Science Foundation’s Alison Singer.

In this spirit, I offer my three quick takeaways from IMFAR 2014:

1. Autism is growing up:

Judging from the topic of Friday morning’s keynote address by Marsha Mailick, director of the Waisman Center at the University of Wisconsin-Madison, the new epidemiological data two sets of researchers released on the health of adults with autism, and the focus of two of the conference’s scientific panels, it seems evident that researchers are taking an increasingly closer look at adults with autism.

“The biggest theme is adult outcomes,” Jeremy Veenstra-VanderWeele, associate professor of psychiatry at Vanderbilt University in Nashville, Tennessee, said during our Twitter Q&A. “This year is a coming out party for grownups.”

In another way, the field itself is growing up. The record turnout at this year’s conference and the unprecedented amount of money going toward autism research underscores the field’s increasing maturity.

Still, autism is a relatively new area of study. Yale University’s James McPartland put this in perspective with his take on the conference: “It’s amazing to think that, despite how much we have yet to learn, everything we know about autism has been learned in a person’s lifetime.”

On Wednesday, a large portion of IMFAR’s approximately 500-strong student and postdoctoral members assembled for a hands-on grant-writing workshop. After an overview of research priorities by funding agencies, groups of students were matched with senior investigators to fine-tune grant proposals and get candid feedback.

An oft-emphasized priority of this year’s meeting was to engage early-career autism researchers and connect them with quality mentorship opportunities.

“The enthusiasm and passion of the students here is an inspiration,” Francesca Happé, president of the International Society for Autism Research, tweeted during our Q&A chat.

The organizers suggest that the workshop will be a permanent and perhaps expanded fixture of the IMFAR program in future years. 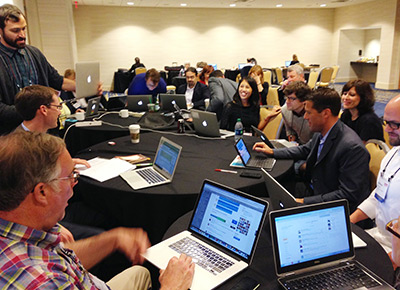 On Friday afternoon, we hosted a Twitter Q&A chat as a way to generate an open dialogue among researchers, clinicians and stakeholders about the current state of autism research and how to move it forward.

According to Keyhole, an analytics service that tracks social media statistics, the chat involved more than 1,300 posts appearing in the feeds of more than 300,000 Twitter users.

Singer suggested that the biggest breakthrough of the meeting was, perhaps, “dozens of scientists, on Twitter chat, communicating directly with public.”

A full transcript of the discussion can be found here, and I’ve highlighted a handful of threads from the chat below.

What are the most important autism findings that came out this year?

William Mandy, University College London: “In terms of diagnosis, the Huerta et al. study did a lot to calm fears about the impact of DSM-5.”

Peter Bell, Eden Autism Services: “I’m most encouraged to see more attention being devoted to adult services and lifespan issues of those living with autism.”

Pamela Feliciano, SFARI: “I am really interested in all of the work that EU-AIMS is doing to promote viable objective clinical trial outcome measures.”

John Robison, author of Look Me in the Eye: “I am happy to see more of the research focused on the deliverable end of the range, as opposed to basic research. Basic science is good but we need to always deliver value to our community if we want to build their support.”

How can advocacy groups contribute to autism research and what can researchers learn from stakeholders?

James McPartland, Yale Child Study Center: “Stakeholders can guide our priorities and help us understand what matters to those living with ASD.”

Michael Rosanoff, Autism Speaks: “Common theme of IMFAR 2014: individuals, parents and communities must be partners — not subjects — in autism research.”

Feliciano: “We need science communicators to help dispel myths. Parents’ first question to me should not be about vaccines.”

Kevin Pelphrey, Yale Child Study Center: “I consult with a person with autism every day. Very helpful, and keeps me honest.”

What do think is the best emerging biomarker that could identify subgroups of autism?

Jeremy Veenstra-VanderWeele, Vanderbilt University: “We need to start looking at the edges of distributions, rather than total ASD versus control comparisons.”

Mandy: “Weak central coherence [is] not a biomarker, but a cognitive endophenotype that may delineate a subgroup.”

Robison: “We have to be careful with biomarkers; the same marker could portend crushing disability or eccentric geekiness. How to tell?”

The Centers for Disease Control and Prevention released new numbers estimating that 1 in 68 have autism. What do you tell people when they ask about an ‘epidemic’?

Chris Gunter, Marcus Autism Center: “I get asked about ‘epidemic’ very often. I explain that our diagnosis and ascertainment has continued to improve over time.”

Mandy: “I think the expectations we place on children’s social skills and behavior continue to rise — which means more get labeled.”

Pelphrey: “I tell them an epidemic is ‘a widespread occurrence of an infectious disease in a community at a particular time.’”

Robison: “The rising autism prevalence numbers show that we are a formerly invisible army, emerging into the light.”

How can we address the shortage of brain tissue donated from people with autism, and how might such tissue help research?

David Amaral, MIND Institute at the University of California, Davis: “We need ambassadors to spread the word that lack of donated postmortem brain is holding up progress. Help us!”

What kind of autism research would you like to see this coming year?

Veenstra-VanderWeele: “Continuing trend for research that carefully studies defined subgroups that may respond to treatments.”

Happé: “I want to know whether the women with ASD who fly ‘under the radar’ are coping or suffering in silence.”

Pelphrey: “Test claims of early indicators in a population sample to have a better sense of true predictive value.”

Robison: “Most studies are still focused on failures. It’s worth researching how to develop our strengths.”