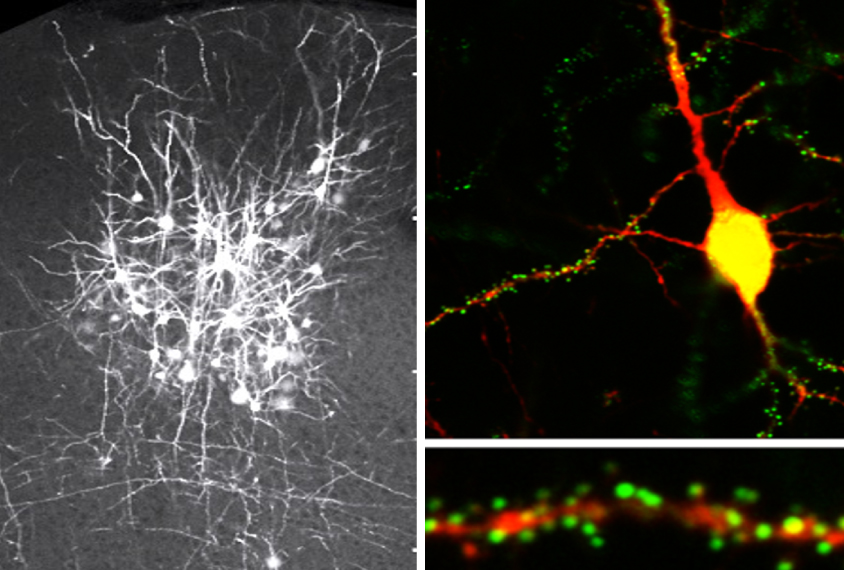 Form factor: A variant of the SYNGAP1 protein is essential for the function of excitatory synapses.

Boosting levels of a variant of the autism-linked protein SYNGAP1 can improve a mouse’s cognition and protect the animal from seizures, according to a new study. The findings, the team says, could inform treatment options for people with mutations in the SYNGAP1 gene, who often have epilepsy, intellectual disability and autism.

SYNGAP1 codes for a protein that abounds at synapses and is thought to aid in learning and memory. Still, it has been unclear how a single gene can have such an outsized effect on brain development, says lead researcher Gavin Rumbaugh, professor of neuroscience at UF Scripps Biomedical Research in Jupiter, Florida.

One possibility is that SYNGAP1 serves multiple brain functions through a phenomenon called alternative splicing, in which coding segments are pieced together in different patterns to produce several versions of a protein. Loss of the gene would then have compounding effects on brain function, Rumbaugh says, because “you’re not just affecting a linear process; you’re actually affecting many processes.”

SYNGAP1 does encode multiple protein variants, or isoforms, according to previous research. But how the variants — alpha1, alpha2, beta and gamma — contribute to different cognitive and behavioral functions “has been quite mysterious,” says Helen Bateup, associate professor of neurobiology at the University of California, Berkeley, who was not involved in the study.

The new work shows that loss of the alpha SYNGAP1 isoforms leads to cognitive difficulties and increased seizures in SYNGAP1-deficient mice — and that replacing the protein variants can improve those traits.

“There’s a lot going on,” and a lot to still unravel, Bateup says. But, she adds, “it’s pretty compelling evidence that these alpha isoforms are really important for the synaptic functions of SYNGAP1.”

Rumbaugh and his colleagues started “fiddling around” with SYNGAP1 protein variants by accident, he says. Nearly a decade ago, they engineered a mouse model to express a red fluorescent protein in the animal’s brain wherever SYNGAP1 protein was translated, which they planned to use to screen for small molecules that shape SYNGAP1 expression.

“It turned out to be a bad screening tool,” Rumbaugh says. “But we thought it was a good model, because we measured total SYNGAP1 protein, and it was relatively fine.”

The engineered mice had some unexpected behaviors, however: Those that carried a single copy of the mutated gene performed worse than wildtype mice on tests of cognition and long-term memory, and they were more prone to seizures — traits that mirrored those of mice that have too little SYNGAP1 protein of any form.

Mice with excess alpha SYNGAP1 performed better than wildtype mice on a test of spatial navigation. They also had less frequent seizures than wildtype mice after being given a seizure-inducing drug. And mice engineered to have a dearth of SYNGAP1 overall, but boosted levels of the alpha isoforms, saw similar improvements in cognition and protection against seizures.

Mice with the dysfunctional alpha1 isoform, on the other hand, were more prone to seizures and performed worse on a test of spatial navigation than wildtype mice, further pinning the effects to that isoform. The findings were published in eLife in April.

Therapeutics for people with mutations that cause SYNGAP1 protein deficiencies largely focus on increasing protein levels. But the new work highlights that doing so indiscriminately may not be effective, says Karun Singh, senior scientist at the Krembil Research Institute at University Health Network in Toronto, Canada, who was not involved in the study.

“Future efforts to develop treatments for SYNGAP1-related disorders, such as gene therapy for people who lack a copy of the gene, need to ensure that alpha1 isoform expression is indeed restored in the brain — using targeted screening measures in future clinical trials,” Singh says. “It would be important to measure this in patients during and after treatment to ensure the right isoform is targeted.”

In addition to studying the alpha isoforms as potential targets for treating people with SYNGAP1 mutations, Rumbaugh and his colleagues also plan to study the variants’ effects on cognition and neurodevelopment more generally.

“If we understand how [SYNGAP1] wires the brain, and improves cognition and excitability, that may uncover molecular and cellular mechanisms that we can use to help kids and adults with seizure or cognitive impairment generally,” Rumbaugh says.