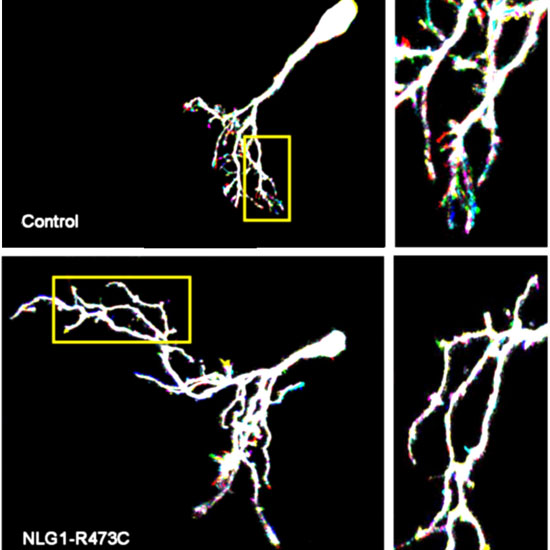 Stunted growth: Neurons injected with a mutant neuroligin protein (below) have fewer dendrites compared with controls (above).

Proteins associated with autism mediate the growth of spiny neuronal projections, called dendrites, that form brain circuits in early life, according to unpublished research presented today at the Society for Neuroscience meeting.

Neurexin and neuroligin proteins are known to interact within synapses — which connect neurons  —  to regulate their formation and maintenance. But the exact role of these proteins in neuronal development is unclear.

Kurt Haas and his colleagues used high-resolution microscopy to examine the brains of awake tadpoles four to five days after fertilization, a developmental time point that corresponds to human development from in utero stages through the early years of life.


The scientists used a technique called in utero electroporation to inject single neurons with a neuroligin gene containing the same mutation — R473C — that has been linked to autism1. After 24 hours, they assessed neuron growth every five minutes for one hour.

Neurons containing the gene mutation have fewer dendrites than those of the healthy neurons, researchers found. Neurons usually grow and retract until they find stable synaptic partners, but these mutant neurons grow and retract without stabilizing.

The tadpole is a good model for studying autism because its neurexin and neuroligin genes are similar to those of humans and rodents, says Haas, an assistant professor in cellular and physiological sciences at the University of British Columbia.

“We find that’s true for most of the synaptic proteins we look at,” he says.

What’s more, the type of tadpole Haas’s group uses is transparent, allowing the scientists to see and manipulate single cells in its brain. The scientists are able to see the developing brain in vivo one day after fertilization, whereas researchers studying mouse brains must wait several days after birth.

“During those early time points, you can see brain development not readily accessible in mammals, and thus can make discoveries that researchers studying mice may have missed,” Haas says.

Haas’s group is looking at how mutations in neurexin and neuroligin regulate the formation of synapses, which occurs simultaneously with dendrite formation. The lower number of dendrites might limit the numbers of synapses that can be formed, he says.