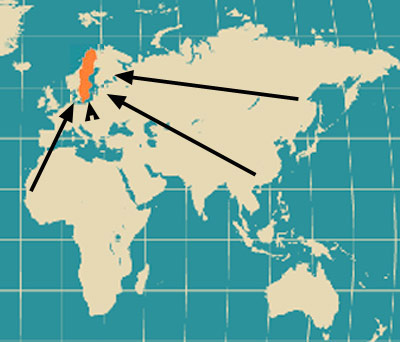 Swedish migration: Only specific groups of immigrants — those from low-income countries and those who migrated near or during pregnancy — have an increased risk of autism, suggests a new study.

Swedish migration: Only specific groups of immigrants — those from low-income countries and those who migrated near or during pregnancy — have an increased risk of autism, suggests a new study.

Immigrating to another country during pregnancy appears to boost the risk of having a child who has low-functioning autism, according to a comprehensive, population-based study in Sweden1.

The study, which was published online 23 February in the British Journal of Psychiatry, analyzed health data from all children — nearly 60,000 — living in Stockholm county between 2001 and 2007.

It found that the risk of low-functioning autism is also greater for mothers coming from countries with a low human development index, a measure of a country’s life expectancy, income and education.

The new findings follow several small studies in Sweden and elsewhere suggesting that rates of autism are higher among immigrants. But this effort is unique in size, encompassing nearly 5,000 children with autism. It is also the first to look specifically at the timing of pregnancy in relation to immigration as a risk factor.

“This is extremely important because it reinforces the idea that it is not necessarily the region where one comes from that influences [autism] risk, but that factors associated with the migration itself do,” says Brian Lee, assistant professor of epidemiology and biostatistics at Drexel University School of Public Health in Philadelphia, who was not involved in the study.

The study’s size also allowed the researchers to independently assess the risk associated with high- and low-functioning autism, distinguished as an IQ above or below 70.

The fact that immigration factors boosted rates only of low-functioning autism might suggest that there are different risk factors for these two groups.

But the finding might also result from cultural factors, says Eric Fombonne, Canada Research Chair in Child Psychiatry at McGill University in Montreal, who was not involved in the study. For example, the link between immigration and autism with intellectual disability may reflect a cultural bias in the tests used to assess IQ rather than a true difference, he says. He points out that when children with high- and low-functioning autism were considered together, parents’ immigration had no effect on risk.

Previous research has linked parents’ immigration to an increased risk of autism, but the causes behind this association remain unclear.

Some studies have found links to specific countries of origin. Among the highest profile are those linking higher autism rates specifically to children of Somali immigrants in Sweden and Minnesota.

These and other reports have prompted theories that genetic factors or vitamin D deficiency are to blame. Others have pointed toward cultural factors, such as increased use of health or social services, and hence greater diagnosis, among some immigrant groups. There is little evidence to back any specific explanations, however.

In the new study, researchers used medical and other records, including those from education and occupational therapy services, to determine autism diagnosis, parents’ country of origin and timing of immigration, as well as whether the children diagnosed with autism also had intellectual disability. Because both education and healthcare in Sweden are publicly funded, information-rich records from different agencies can be easily synthesized using national identification numbers.

About 20 percent of the children in the study had parents born outside of Sweden, most commonly in countries in East Africa, Northern Europe and Western and Southern Asia. Nearly 800 of the 5,000 children with autism were born to immigrants.

“The large sample size meant we were able to do more robust statistical analysis than previous studies were able to do,” says Dheeraj Rai, clinical lecturer at the University of Bristol in the U.K. and lead scientist on the study.

Neither parental age nor obstetric complications explained the difference.

The increase remained regardless of country of origin and human development index, which argues against ethnicity as the sole explanation for increased risk among immigrants, says Rai. “If it was just related to ethnicity, there shouldn’t be any change in risk over time.”

While the researchers did not have enough information to study migration-associated factors that might predispose a child to autism, they speculate that maternal stress may play a role.

Animal studies show that prenatal stress can alter brain development, including in ways that mimic some aspects of autism. But research on the effects of stress during pregnancy in humans is limited.

“We really need to understand more about the context of migration for those families,” says Catherine Rice, who leads the Autism and Developmental Disabilities Monitoring Network at the U.S. Centers for Disease Control and Prevention and was not involved in the study. “Were there stressful events at the time? Are there other risk factors in those families? Illnesses or exposures that can be tracked?”

It’s also not yet clear whether the same risk profiles are seen in children with intellectual disability but not autism.

Evaluating the possible theories behind the link between immigration and autism will require extensive examination of rates of the disorder around the world.

“In order to sort out issues about prevalence and risk, we need a better understanding of how autism is distributed by geography, ethnicity or socioeconomic factors,” says Rice. Information on autism rates in lower- and middle-income countries is currently limited, especially compared with that available for wealthier countries.

One of the major limitations of this and other autism studies on immigration is the challenge of assessing the role of cultural factors. Previous research has shown that autism rates differ among ethnic groups in part because of how they access health services2. And members of some ethnic groups have more severe symptoms when diagnosed, most likely because they are diagnosed later than their peers3.

Indeed, the researchers found immigrant parents had a lower risk of having a child with high-functioning autism compared with the general population, which Rai and collaborators speculate is due to cultural factors. They say that Swedish-born parents may be more likely to seek assistance for children with mild symptoms compared with immigrants.

“When looking at the issue of immigration in relation to autism, you want to make sure that detection is equally efficient in all the different populations,” says Fombonne.

The effectiveness of diagnostic tests for autism is also an issue. Little is known about how well they work in different populations.

Fombonne also points out that a spike in risk for women who immigrated to Sweden while pregnant may be due to the fact that women who already have a child with autism did not leave their home country or are prevented from doing so.

Rai and his collaborators now plan to look at other risk factors for autism within the same group. They also hope to further study the contribution of stress during pregnancy by examining the effect of different types of stress, such as losing a loved one or suffering from depression or anxiety.