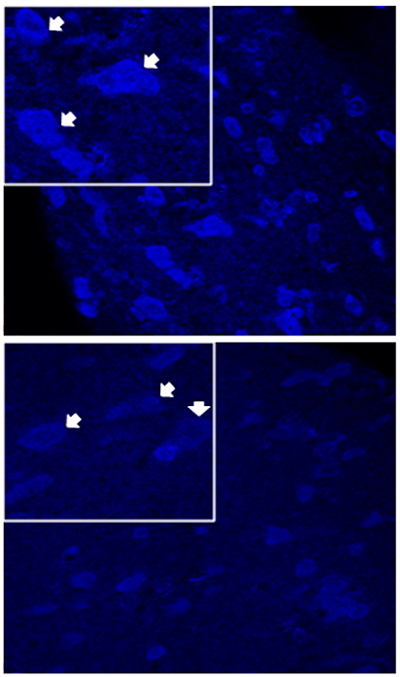 Brain drain: RORA is expressed at lower levels in the frontal cortex of children with autism (bottom) than in that of controls (top).

RORA, an autism candidate gene, encodes a protein that binds to more than 2,500 other genes and alters the expression of some of those genes, according to a study published 22 May in Molecular Autism1.

That long list is chock-full of genes that are involved in autism-related biology. For example, dozens of the genes are related to the development of the cerebellum, a brain region important for motor coordination that has been linked to autism. Others are involved in the birth of new synapses, the junctions between neurons, and in the transmission of messages between synapses.

Most exciting, the researchers say, is that 426 of RORA’s gene targets are listed in AutismKB, a database of autism candidates maintained by scientists at Peking University in Beijing, and 49 in SFARI Gene. (The latter is funded by the Simons Foundation, SFARI.org’s parent organization.)

“The list was so highly enriched, it was just amazing to us,” says lead investigator Valerie Hu, professor of biochemistry and molecular biology at George Washington University in Washington, D.C. “What it tells me is that any mechanism that will lead to dysfunctional RORA expression will impact a whole bunch of pathways relevant to autism.”

Other researchers say they are intrigued by the findings because previous studies have shown that RORA interacts with sex hormones.

“The exciting work coming out of Valerie Hu’s lab is providing important evidence consistent with the fetal testosterone theory of autism,” says Simon Baron-Cohen, director of the Autism Research Centre at the University of Cambridge in the U.K, who was not involved in the study.

Baron-Cohen first proposed that theory, which holds that individuals with autism have an ‘extreme male brain’ caused by high levels of testosterone in the womb. If true, this may help explain why the disorder is four times more common in boys than in girls.

Neuroscientists have been interested in RORA for decades. A 1962 study first described the so-called ‘staggerer’ mice, an inbred strain with a tottering gait, muscle tremors and an underdeveloped cerebellum2. In 1996 researchers pinpointed the gene responsible for the animals’ problems: retinoic acid-related orphan nuclear receptor alpha, or RORA. The gene encodes a transcription factor, a protein that turns other genes on and off.

The new study analyzed the genome of cultured human neurons and found that RORA binds to 2,544 unique genes. Just because RORA binds to a gene doesn’t mean it will influence its expression, however.

Hu’s team has so far chosen six of the autism-linked targets — ITPR1, CYP19A1, A2BP1, HSD17B10, NLGN1 and NTRK2 — for in-depth study.  The researchers confirmed RORA’s effect on these genes by showing that when they cut RORA levels by half, all six genes also go down in their expression.

CYP19A1 encodes aromatase, an enzyme that converts testosterone to estrogen, and also seems to be involved in synaptic activity. NLGN1 codes for neuroligin-1, an autism-linked protein that can strengthen or weaken synapses.

RORA didn’t catch the attention of autism researchers until 2010, when Hu’s team published a study on the characteristic chemical changes to DNA in people with autism, the so-called ‘epigenetic’ signature. She showed that identical twins who are discordant for autism — meaning that one twin has the disorder and the other does not — carry different levels of methylation in their DNA. RORA turned out to be one of the genes that is methylated differently in the twin with autism than in the twin without3.

In later experiments, Hu’s group showed that cultured neurons exposed to estrogen produce more RORA4. Conversely, they dial down RORA production when exposed to testosterone. This makes sense because RORA is known to dampen levels of aromatase.

Hu also found lower levels of RORA in the frontal cortex and cerebellum in postmortem brain samples from children with autism than in controls.

Of the six genes confirmed as RORA targets so far, Baron-Cohen is particularly intrigued by CYP19A1. In 2009, his group reported common variants in this gene that increase the risk of autism5.  “Are RORA levels low in autism because of genetic differences in CYP19A1?” he asks.

The list of RORA’s targets is also interesting for neuroscientists working on sleep, which is disrupted in many children with autism. Take John Hogenesch, an expert on the mammalian circadian clock, the biological mechanism that allows us to coordinate sleep-wake cycles, metabolism and other behaviors with a 24-hour day. Hogenesch has been interested in RORA since 2004, when his team reported that RORA regulates the expression of BMAL1, a gene that’s crucial for clock function6.

Given that RORA has been linked to the cerebellum, sex hormones and the circadian clock, “it makes you wonder, via what pathway is the autism arising?” says Hogenesch, professor of pharmacology at the University of Pennsylvania.

Hogenesch notes that another gene in the ROR family, called RORB, might also have links to autism. “RORB is definitely in the central nervous system, so that would be worth investigating,” he says.

Perhaps most interestingly, there are drugs that selectively target ROR genes and can effectively boost their expression, Hogenesch says. “There could be potential there for [autism] therapeutics.”