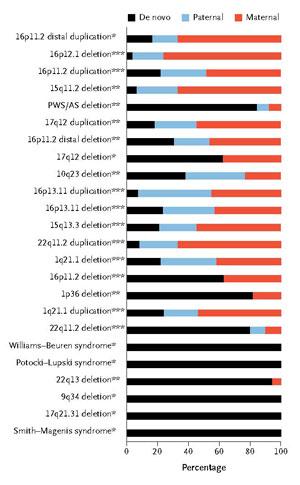 Click to enlarge image Family history: Inherited deletions or duplications of DNA are more likely to be passed down from the mother (red) than the father (blue).

Family history: Inherited deletions or duplications of DNA are more likely to be passed down from the mother (red) than the father (blue).

A comprehensive analysis of large deletions and duplications of DNA bolsters the idea that some cases of developmental delay and autism result from a combination of two damaging hits to the genome, according to research published 12 September in the New England Journal of Medicine1.

The findings may help explain why certain large deletions or duplications, also known as copy number variations (CNVs), can have widely variable effects. An autism-linked CNV on chromosome 15, 15q13.3, is also associated with intellectual disability, schizophrenia and epilepsy, for example.

“Some CNVs are like clockwork, generating the same facial features and other symptoms, but others manifest very differently,” says lead investigator Evan Eichler, professor of genome sciences at the University of Washington in Seattle. “The question is, why?”

Some CNVs are syndromic, and always cause a specific set of symptoms, such as the chromosome 7 deletion responsible for Williams syndrome. The study found that syndromic CNVs are almost always spontaneous, meaning the CNV is not inherited from the parents.

In contrast, CNVs of variable effect are more likely to be inherited. These CNVs are also more likely to occur along with a second deletion or duplication. The larger the CNV — and the more genes it includes — the lower the intelligence score in an individual who carries it. The researchers also found that variable-effect CNVs are more likely to be passed down from mothers than from fathers.

“They show quite convincingly that individuals who have more than one hit have considerably more risk than people with only one,” says Jonathan Sebat, associate professor of psychiatry at the University of California, San Diego, who was not involved in the study.

The two-hit hypothesis isn’t new, but the research provides the first assessment across a large number of CNVs of the double-hit rate in children with developmental delay.

“This helps put the hypothesis on firm ground and shows that we need to look for other rare variants that are also contributing,” says Sebat.

People with autism have more CNVs than controls do. A 2010 study from Eichler’s lab analyzed data from more than 15,000 children and found that children with developmental delay are 20 times more likely than controls to have a CNV larger than 1.5 megabases.

In the new study, the researchers analyzed data from more than 30,000 children. In particular, they focused on 2,312 children who carry any of 72 large, rare CNVs linked to developmental delay and congenital abnormalities.

The researchers had parent data for 653 of the children in the study, allowing them to determine whether the CNVs are inherited or spontaneous. They found that about ten percent of the children with variable-effect CNVs — which are more likely to be inherited — and five percent of those with syndromic CNVs, have a second variation.

“It’s telling us that in some cases, a de novo mutation that’s sporadic is sufficient to result in [autism],” says Eichler. “In other cases, it will sensitize you but you need another insult.”

Ed Cook, professor of psychiatry at the University of Chicago, points out that the double-hit hypothesis may explain some of the variability — such as the co-occurrence of autism — even in the case of syndromic CNVs.

For example, only 50 percent of people with fragile X syndrome, an inherited form of intellectual disability, have autism. This group might have a second hit, perhaps a single-letter mutation not detected in this analysis, says Cook.

When Eichler’s team looked only at CNVs of unknown significance — those that have not yet been tied to a disorder — they found that children with developmental delay are eight times more likely than controls to have two CNVs sized 500 kilobases or larger.

The findings confirm a 2010 study from Eichler’s lab supporting the double-hit hypothesis2. In that study, Eichler’s team found that parents who carry a CNV in the 16p12.1 chromosomal region often have a history of bipolar disorder, schizophrenia or some other psychiatric disorder.

That study also found that children with the 16p12.1 CNV are more likely to have a second CNV than controls are, and those with two hits have more severe symptoms than those with only one. (Data on parents’ psychiatric diagnoses are unavailable for the 2,000 families in the new study.)

The researchers also found that CNVs of variable effect are almost twice as likely to be inherited from the child’s mother than the father. The reasons for this are unknown, but Eichler says it may be because women are protected against autism and other neurodevelopmental disorders. (Autism rates are four times higher in boys than in girls.)

CNVs are only one source of genetic risk. Single-letter variants, or point mutations, can also boost the risk for autism and developmental delay.

Eichler aims to repeat his analysis looking for second hits that are point mutations, an effort that will require additional genome sequences from families with developmental delay.

Researchers also have yet to uncover the relationship between the two hits. “Do the two CNVs interact with each other or are they simply additive?” asks Sebat.

The findings may have some practical utility. Doctors faced with a child who has two large CNVs of unknown effect can warn parents that the child is at an increased risk of developmental delay.