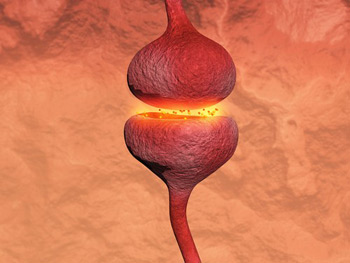 Troubled translation: A mutation that triggers excess protein production at the connections between neurons also leads to abnormal social behavior.

A number of mouse models of autism-related disorders, including fragile X syndrome and tuberous sclerosis complex, show excessive protein production, particularly at synapses, the connections between neurons. The theory is that too many synaptic proteins leads to a hyperconnected brain.

In the new study, researchers focused on two genes that play a central role in translation: eIF4E, which initiates translation by binding to messenger RNA, and 4E-BP2, which blocks translation by inhibiting eIF4E.

Knocking out 4E-BP2 or increasing expression of eIF4E both increase production of neuroligin proteins. Mutations in neuroligins, which help structure the synapse, have been linked to autism. Mice lacking 4E-BP2 also show abnormal electrical activity and autism-like behavior.

Correcting this protein imbalance, either with chemical compounds or genetic manipulation, resolves both the behavioral and physiological problems in the mice, suggesting a new avenue for drug development.

“It’s extremely surprising that it works so well,” says lead investigator Nahum Sonenberg, professor of biochemistry at McGill University in Montreal. The findings fit in with a number of models of autism and point to both a target and a mechanism underlying the disorder, he says.

4E-BP2 and eIF4E lie within several biochemical pathways linked to autism, including RAS-ERK, which is involved in cell death, and PI3K, which incorporates PTEN, TSC1 and TSC2. The last two genes are involved in tuberous sclerosis complex.

Sonenberg’s group became interested in 4E-BP2’s role in protein synthesis because of the growing number of autism-linked mutations in these pathways.

“This study takes a different angle than others by manipulating a candidate pathway rather than a gene where mutations have already been found [in a person with autism],” says Raymond Kelleher, assistant professor of neurology at Massachusetts General Hospital in Boston, who was not involved in the research.

In 2008, Kelleher and Mark Bear proposed the ‘troubled translation’ hypothesis for autism2, suggesting that excess translation is a core mechanism in autism.

In the new study, Sonenberg and his collaborators found that mice lacking 4E-BP2 show little interest in social interactions, spending more time investigating a novel object than another mouse. The animals also show a boost in translation of neuroligin proteins, but not other autism-related proteins, compared with controls. The increase is specific to translation, not transcription, the production of messenger RNA from DNA.

The mice also show a glut of excitatory electrical activity in cells of the hippocampus, part of the brain involved in learning and memory. Studies have shown an imbalance in excitatory and inhibitory signals in the brain in a number of different mouse models of autism.

“I think this imbalance plays a key role in autism,” says Peng Jin, associate professor of human genetics at Emory University in Atlanta, who was not involved in the study. “From a treatment perspective, if we can balance it again, we should be able to correct behavior.”

Drug companies have already developed a number of compounds designed to inhibit translation, largely as cancer therapies, which could be tested in autism mouse models.

Sonenberg’s team tested one such drug, dubbed 4EGI-1, which prevents eIF4E from binding to translational machinery. The drug normalizes levels of NLGN1, restores the excitatory-inhibitory balance in the hippocampus, and restores normal social behavior. The same dose has no effect in control mice.

The fact that just dampening NLGN1 improves the various defects suggests that the ‘troubled translation’ hypothesis may be simpler to address than some had suspected.

However, drug developers will need to tread carefully, given that turning up one type of neuroligin improves symptoms and turning up another worsens them.

“It is still unclear how different neuroligins shape the balance of excitatory and inhibitory transmission,” says Christos Gkogkas, a postdoctoral fellow in Sonenberg’s lab who did the work. “This is important work in progress.”

The researchers next plan to knock out 4E-BP2 at specific stages in development as well as different regions of the brain to pinpoint locations or time windows at which neuroligin synthesis is most important.