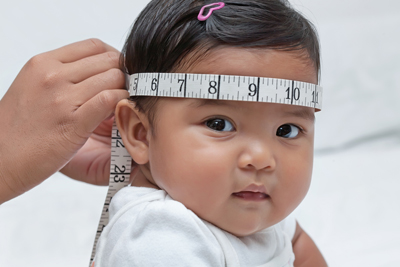 Heady bias: Studies that rely on dataset norms are more likely to report large heads in children with autism than are those that locally recruit controls.

Two new studies raise questions about one of the most frequently reported biological signatures of autism: a larger-than-normal head.

Leo Kanner’s original description of autism noted this so-called macrocephaly, and dozens of studies have since reported that children with autism show accelerated head growth in their first two years of life.

Most of this work relied on biased control samples, according to an analysis of 34 studies, published 23 May in Biological Psychiatry1.

Only 7 of the 34 studies are “methodologically robust,” meaning that they followed the same children over time and relied on controls recruited from the same geographic region as the participants with autism. Four of the seven studies found significantly faster head growth in those with autism compared with controls, but three did not.

“It was a bit of a shock to me,” says lead investigator Armin Raznahan, a staff scientist at the National Institute of Mental Health’s Child Psychiatry Branch. “Like everyone else, I’ve written papers that include the sentence: ‘Early brain overgrowth is one of the best replicated findings in autism.’”

Another study, published 10 June in the same journal, also throws some cold water on the link between macrocephaly and autism2.

That study looked at head circumference in 7,225 individuals enrolled in the Simons Simplex Collection, a genetic repository of autism families. (The collection is sponsored by the Simons Foundation, SFARI.org’s parent organization.)

After accounting for sex, height, weight and genetic ancestry, the researchers found that children with autism do tend to have larger heads than their unaffected siblings, but the difference is small: just 2 millimeters on average. What’s more, just 89 of the 1,889 children with autism have a head circumference that is at least two standard deviations from the average, but only 53 of those are bigger than average; the other 36 are smaller.

Still, researchers who have been working in this field say there’s compelling evidence that children with autism have larger brains, if not larger heads, than controls do.

“We’re all only doing head circumference as an indirect measure of brain,” says Joe Piven, professor of psychiatry at the University of North Carolina, Chapel Hill, who was not involved in the new work. For the past few years, Piven’s team has been scanning the brains of the younger siblings of children with autism at 6, 12 and 24 months of age.

Piven’s results have not yet been published. But preliminary data “clearly shows” brain enlargement between 12 and 24 months in children who develop autism, he says. “So I’m pretty sure it’s a real thing,” Piven says. “Whether head circumference picks it up routinely or not, I don’t know.”

The size of an infant’s head depends on many factors, genetic and environmental, so head-growth patterns can vary among countries or even cities.

To save time and money, many research teams rely on head circumference norms, such as the dataset published by the U.S. Centers for Disease Control and Prevention (CDC), rather than recruiting controls from the same community as the participants with autism.

“People use them because it’s easy — you just look them up on a table,” Piven says.

For years, though, researchers have raised doubts about the validity of standardized growth charts.

For example, in 2010 Carrie Daymont and her colleagues analyzed head-size data from 75,000 children in a primary care network from birth to 2 years old. Beginning at 6 months old, this group of typically developing children showed significantly larger heads compared with norms described by the CDC and the World Health Organization (WHO)3.

The CDC norms are based on a small sample — 3,803 head measurements of boys and 3,629 of girls, notes Daymont, assistant professor of pediatrics and child health at the University of Manitoba in Canada.

“That is not a large sample if you are trying to accurately estimate extreme percentiles such as the 95th or 97th,” she says. “I believe that we are very likely to be identifying an excess number of children as having unusually large heads.”

Raznahan says he was struck by Daymont’s paper because some of the studies reporting macrocephaly in autism used the CDC data as controls.

In his new analysis, Raznahan found that 11 of the 34 studies in his analysis used CDC norms and 18 tapped into similar datasets, such as those from the WHO and the 47-year-old Tanner growth curves from the U.K.

He also looked at head size data from the medical records of 35 boys with autism. At no time between 2 and 18 months was their head growth significantly different from a comparison group of locally recruited controls, he says. And at about 6 months or older, children in both groups showed markedly larger heads compared with the CDC and WHO norms.

Still, some studies using local controls do find large heads in children with autism. “I believe the authors go too far in calling into question the reports of enlarged brain growth,” says David Amaral, research director of the MIND Institute at the University of California, Davis.

His team has found, for example, that some boys with regressive autism have abnormally large heads. The new Simons Simplex Collection study also found that regression is associated with macrocephaly, as are certain genetic mutations.

“We concluded that the phenomenon of early brain overgrowth was certainly real,” Amaral says, “but only applied to a subset of children with autism spectrum disorder.”