Study picks up autism broadcast in tiny antennae on cells 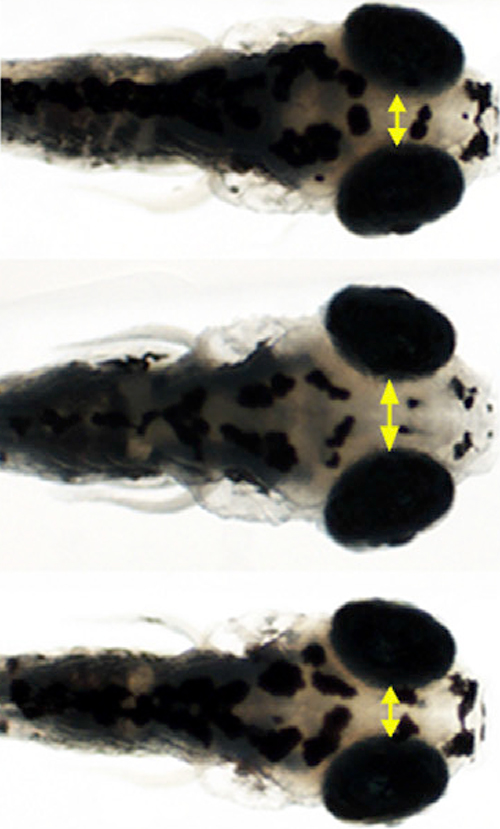 Fishy finding: Zebrafish with an autism-linked mutation have enlarged heads (middle). Mutant fish that also have alterations in a cilia gene (bottom) have heads more similar to those of controls (top).

Mutations in a section of chromosome 16 that is linked to autism have an unexpected effect: They alter the miniscule, static hairs, called cilia, that adorn the surface of all cells. The findings, reported 7 May in the American Journal of Human Genetics, suggest that problems with these cilia may contribute to autism1.

“We don’t know what the ciliary contribution to autism is, but there is one. There’s no question about it,” says Nicholas Katsanis, professor of cell biology at Duke University in Durham, North Carolina, and one of the researchers on the study.

People with too few or too many copies of a segment of chromosome 16 called 16p11.2 show a wide range of features. Those with deletions, for example, tend to have unusually large heads and obesity. Those with duplications typically have small heads and minimal body fat. Roughly 20 percent of people with either variant have autism.

The new study suggests that some of these symptoms stem from abnormal cilia. It also raises the possibility that drugs that target these cilia ease symptoms of autism. For example, the researchers found that a mutation in CEP290, a gene necessary for the formation of cilia, mitigates the consequences of a mutation in a 16p11.2 gene. A drug could try to mimic that effect.

They also found a girl with a 16p11.2 deletion and a CEP290 mutation who has milder symptoms than many other people with the deletion.

“The possible role of ciliary genes [in autism] is intriguing,” says Raphael Bernier, associate professor of psychiatry at the University of Washington in Seattle, who was not involved in the study.

In the new study, Alexandre Reymond and his colleagues analyzed gene expression in the blood of 50 people with deletions and 31 people with duplications in 16p11.2. They found 1,188 genes whose expression is altered in these people relative to 17 controls.

Among the genes is a group known for its role in Bardet-Biedl and Joubert syndromes, disorders caused by mutations in ciliary genes. Bardet-Biedl syndrome leads to kidney problems, vision loss, obesity and some autism-like traits, such social deficits and restricted behaviors2. Joubert syndrome has also been linked to autism.

Still, no one had followed up on how mutations in cilia genes might lead to autism symptoms.

Of the 30 genes that have been linked to Bardet-Biedl and Joubert syndromes, 10 turned up in Reymond’s analysis.

“This of course raised our eyebrows,” says Reymond, associate professor at the University of Lausanne in Switzerland.

Reymond then remembered that his colleague Katsanis had studied cilia early in his career. But Katsanis had switched fields to autism because, he says, he was tired of working on cilia.

“Alex calls me on my cell [phone] and says, ‘Guess what? We think that there’s a link between the 16p pathology and cilia,’” Katsanis recalls. “I think what I said to him was, ‘Bullshit,’ and ‘Oh, good Lord, no!’”

To see how 16p11.2 genes might affect cilia on neurons, Katsanis and Reymond turned to mice. Mice with deletions of the region show abnormal expression of cilia genes: higher expression of CEP290, for example, and lower expression of another gene, BBS7. The cilia’s shape is not obviously abnormal, however.

The duplication has the opposite effect on these two genes. And the mice have abnormally short cilia in a part of the hippocampus, a brain region involved in memory.

The researchers also manipulated cilia genes in zebrafish embryos with 16p11.2 mutations. Blocking the expression of KCTD13, a gene in the 16p11.2 region, results in fish with enlarged heads, reminiscent of the increased head size seen in people with 16p11.2 deletions, Katsanis and his team reported in 2012. But when the researchers blocked the expression of CEP290 or raised that of BBS7 in these zebrafish, the fish’s heads were smaller, closer in size to those of normal fish.

“It’s intriguing that the ciliary genes actually rescue the phenotype,” says Lilia Iakoucheva, assistant professor of psychiatry at the University of California, San Diego, who was not involved in the study.

Some of these genes may turn out to modify the effects of autism-linked mutations, says Reymond. For example, the researchers looked at more than 300 families with a history of 16p11.2 mutations and found one particularly intriguing case.

The girl they identified has a 16p11.2 deletion and a mutation in CEP290. She does not have seizures or autism and has a normal head size. Her intelligence quotient is 89 — lower than that of her parents but higher than average for people with the deletion.

Her case suggests that similar mutations offset the effects of 16p11.2 mutations, says Reymond. “It’s an N of one, but at least the N of one doesn’t go against our hypothesis,” he says.