Study of nonverbal autism must go beyond words, experts say 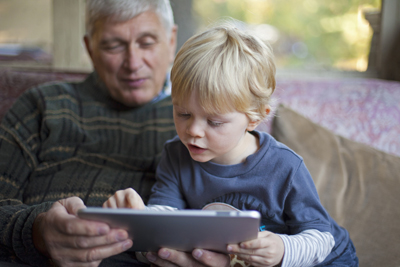 Sound out: Interactive devices do not hinder nonverbal children with autism from learning to speak, and may even help them.

Roughly 25 percent of people with autism speak few or no words. A generation ago, that figure was closer to 50 percent. Most researchers agree that the decline is due to the recognition of more people with milder forms of autism, as well as to the advent of early intervention programs  that have helped more children develop language than in the past.

“One of the primary success stories of early interventions is that they promote language development,” says Helen Tager-Flusberg, director of the Research on Autism & Developmental Disorders program at Boston University. “Nevertheless,” she says, “there are clearly individuals who are diagnosed early, do have access to high-quality interventions, and still fail to acquire spoken language.”

Paradoxically, many researchers now argue that in order to better understand and treat this subgroup of nonverbal people with autism, the field needs to move beyond focusing on speech production. Emerging research suggests that seemingly unrelated issues, such as motor skills and joint attention, may instead be key.

Language delay gets a lion’s share of the attention perhaps because it is often the first and most compelling sign of autism. “Parents, pediatricians, psychologists — everyone, we all focus on word production,” says Joe McCleery, lecturer in developmental neuroscience at the University of Birmingham in the U.K.

But factors that are usually thought of as being outside the realm of speech and communication, such as memory or motor problems, may also play a role, McCleery says. If an infant can’t coordinate movements — such as babbling while rhythmically banging hands on a table or high-chair tray — which is thought to contribute to later language development, then speech may be stymied1.

“It’s very likely that the reasons for why they’re not speaking may be related to a range of different underlying mechanisms,” says Tager-Flusberg.  “Once we understand them a little bit better we’ll be able to target the therapies toward the specific kinds of problems that we identify in different children.”

At the moment, though, children with autism who speak few or no words have received so little research attention that the most basic questions are still on the table.

“We don’t have a really clear definition of what it means to be minimally verbal,” says Connie Kasari, professor of human development and psychology at the University of California, Los Angeles.

Without a firm definition, it’s difficult to compare the findings of different studies. For example, various studies have defined children who use anywhere from 5 to 30 functional words as minimally verbal.

“Most kids are not truly nonverbal, which indicates that they have no words and no sounds,” Kasari says. Instead, they may say single words such as “Mama” and “Dada,” and even a few phrases, often ones that they repeat over and over without regard to context.

The number of words isn’t the only thing that determines whether a child is minimally verbal. Age also matters, as researchers are learning. A child who isn’t speaking at age 2 or 3 might be better thought of as pre-verbal, albeit with a language delay. But one who doesn’t speak at 6 or 7 years, especially after many hours of intervention, is much less likely to ever learn.

One study published earlier this year analyzed data from 535 children with autism enrolled in the Simons Simplex Collection, an autism registry funded by SFARI.org’s parent organization. These children weren’t speaking in two-word phrases at age 4, but 70 percent reached the milestone by age 8, and nearly half were speaking fluently by that time2.

“We found that more children did go on to gain phrase speech than previously thought,” says study leader Ericka Wodka, a neuropsychologist in the Center for Autism and Related Disorders at the Kennedy Krieger Institute in Baltimore.

Wodka and her team also found that children with low levels of social impairment and high nonverbal intelligence quotients (IQs) are the most likely to learn to speak.

“I think what our research points to is that social goals really must be considered in intervention as well,” Wodka says. That is, she says, therapies need to focus on not just the ability to produce words, but the motivation to use them.

IQ is clearly also a thorny issue. Many minimally verbal children are intellectually disabled, but Kasari says she has known some children who could not speak, but could read.

“It can be difficult to tell how intellectually impaired somebody is,” says Nancy Brady, assistant professor of speech, language, hearing sciences and disorders at the University of Kansas. “If they can’t speak, then we maybe undershoot them when we assess them and assume that they are much more impaired than they actually are.”

To circumvent this problem, Brady is developing the Communication Complexity Scale to assess nonverbal communication. This test assesses, for example, whether a child uses gestures to request help with opening a clear plastic jar to obtain a toy3.

“Now we’re looking at what they can do, instead of just what they can’t do,” Brady says. “It allows us to identify more attainable short-term goals.” Therapists may work to help make a child’s gestures clearer and help parents interpret them as a stopgap measure while also working on spoken language development.

Children can communicate nonverbally using a variety of approaches, including cards featuring simple line drawings (known as the Picture Exchange Communication System), by typing on an iPad, or with the aid of a speech-generating device that can be programmed to say words aloud for the child.

“There are a lot of people out there who don’t want to use some sort of augmentative system, because they think the kid won’t talk,” Kasari says.

But in fact, the opposite may be the case. Kasari has unpublished data showing that minimally verbal children who also used a speech-generating device early in therapy have more socially communicative utterances after six months than those who get the device later. It’s not clear why, but “it seems to augment their own ability to talk,” Kasari says.

Still, little is known about how to match minimally verbal children with the best therapies to encourage them to develop spoken language. “We have no idea which kids are going to respond to which interventions,” McCleery says. “The more information we can gather on that, the better.”

There are a few glimmers of promise. Tager-Flusberg and her colleagues are planning a randomized trial of auditory-motor mapping training, a therapy that combines rhythmic hand movements with a sing-song intonation. The approach has been successful in treating people who have lost the ability to speak after a stroke, and pilot studies suggest it can also help those with autism4.

Another intervention that may be particularly helpful for minimally verbal children, called JASPER, emphasizes joint attention and play skills that precede, and may underlie, spoken-language development.

“Most kids look to their parents; they look to objects; they show toys; they point to things; they do all of these things before they ever learn words,” says Kasari, a developer of the therapy. “So I think teaching those particular skills helps fill in those gaps, and helps kids learn language faster.”

Kasari and her colleagues have found that working on these skills is particularly helpful for children with the lowest language abilities5, even those who are intellectually impaired6.

With better treatments, almost every child with autism could learn to speak, Kasari says. But even if a few rely on nonverbal or augmentative systems for the long term, that might still be counted a success, she says. “Every child needs access to communication.”