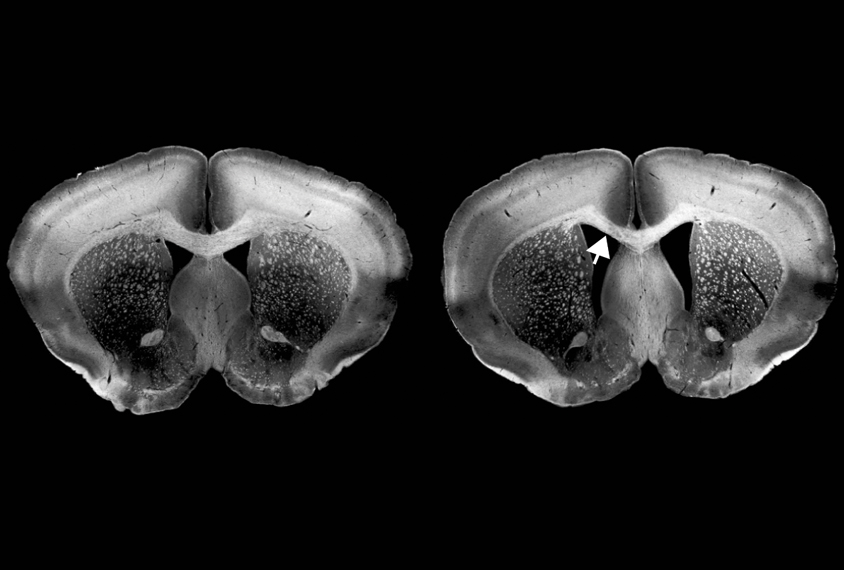 Slender bridge: People with mutations in ACTL6B have an unusually thin corpus callosum (right), the bundle of white matter connecting the two halves of the brain.

Inherited mutations in a gene called ACTL6B lead to autism, epilepsy and intellectual disability, according to a new study1.

The mutations are recessive, which means that they lead to autism only if a person inherits them in both copies of the gene — one from each parent, who are silent carriers. Most other mutations implicated in autism are spontaneous, or ‘de novo,’ mutations, which are not inherited.

The study suggests that recessive mutations in ACTL6B could be a relatively common cause of autism, says co-lead researcher Joseph Gleeson, professor of neurosciences and pediatrics at the University of California, San Diego.

ACTL6B helps to control the expression of other genes in brain cells by encoding part of a protein complex called BAF. This complex tightens and loosens chromatin, the bundle of DNA and protein crammed inside a cell’s nucleus, during transcription. Scientists have linked autism to mutations in many other chromatin regulation genes — including several that encode other parts of the BAF complex.

ACTL6B mutations have previously been associated with neurodevelopmental conditions, but the new study makes a strong case that they are tied to autism, says Gaia Novarino, professor of neuroscience at the Institute of Science and Technology in Klosterneuburg, Austria, who was not involved in the study.

The work also provides a comprehensive look at how mutations in ACTL6B affect the brains of people, mice and flies, and suggests that the gene plays a common role across species.

“It’s kind of shocking how highly conserved the function of this gene is and how robust this phenotype is across different species, all the way from flies to humans,” says Wendy Wenderski, a graduate student in co-lead investigator Gerald Crabtree’s lab at Stanford University in California. These similarities across species highlight ACTL6B’s importance in brain function and indicate that researchers can study animals to learn how the gene works in people, she says. The findings were published in May in the Proceedings of the National Academy of Sciences.

The researchers searched a database of genetic sequences from autistic people, many with parents who are closely related — for example, first cousins. (Recessive mutations are common among the children of such parents.)

Recessive mutations in ACTL6B occur more frequently than expected among autistic people, they found, but not among 256 controls who have other developmental conditions. Among six families, they identified 13 autistic people who have two nonworking copies of ACTL6B.

All of the autistic individuals with ACTL6B mutations in both copies of the gene also have epilepsy and intellectual disability, conditions that would not have distinguished them from the rest of the members of the database.

The researchers also analyzed recessive gene mutations from a 2019 study of more than 2,000 autistic people and 5,800 controls2. In this dataset, ACTL6B ranks sixth among the genes most likely to carry significant recessive mutations, which suggests that ACTL6B mutations are common among autistic people, not just those whose parents are related.

Gleeson and his colleagues used cells from members of one ACTL6B family to make a series of brain organoids — 3D cultures of brain cells. They found that the BAF complex in the mutant organoids contains unusually high levels of ACTL6A, a protein related to ACTL6B. The complex also fails to control chromatin remodeling as effectively, activating a set of genes that are typically shut off.

“It’s like taking the brakes off a train. The train just plows straight ahead,” Gleeson says. “The result of that failed gene regulation is that cells misbehave: They don’t know which way is up, when to turn off, and they generally cause chaos, we think, in the brain.”

The study provides insight into how ACTL6B mutations, as well mutations in other BAF components, might cause autism, says Albert Basson, professor of developmental neurobiology at King’s College London in the United Kingdom, who was not involved in the study. But it is still unclear how, or if, mutations in BAF-complex genes interact with other mutations to disrupt chromatin remodeling in entirely different ways, he says.

Researchers examined mice and flies missing both copies of ACTL6B, and they found that these animals have brain differences that are reminiscent of those seen in people with the mutations. The mice have an atypically thin corpus callosum, the bundle of white matter connecting the two halves of the brain, similar to what the researchers saw in brain scans from five people with ACTL6B mutations. This change to the corpus callosum likely hinders the transfer of information between brain regions.

Similarly, fruit flies missing the fly version of ACTL6B have some altered connections between brain regions. Providing them with functional copies of the human version of the gene prevented this issue, indicating that the gene works similarly across species. The mice missing ACTL6B showed social impairment and increased repetitive behaviors, analogous to what occurs in people with autism. That suggests that the loss of this gene affects mice and people in a similar way, the researchers say.

The study provides a good example of a recessive form of autism that is linked to specific brain circuits, says Timothy Yu, assistant professor of pediatrics at Harvard University, who was not involved in the study.

“Continuing to ferret out the recessive causes will round out our picture of autism’s genetic architecture. It’s likely it will lead to new neurobiological insights, too,” he says.

To follow up on this work, Gleeson and his colleagues are investigating which cell type mediates the effect of ACTL6B loss in the mouse brain. They are also testing whether reinstating the gene in the course of development can restore typical brain development in mice.