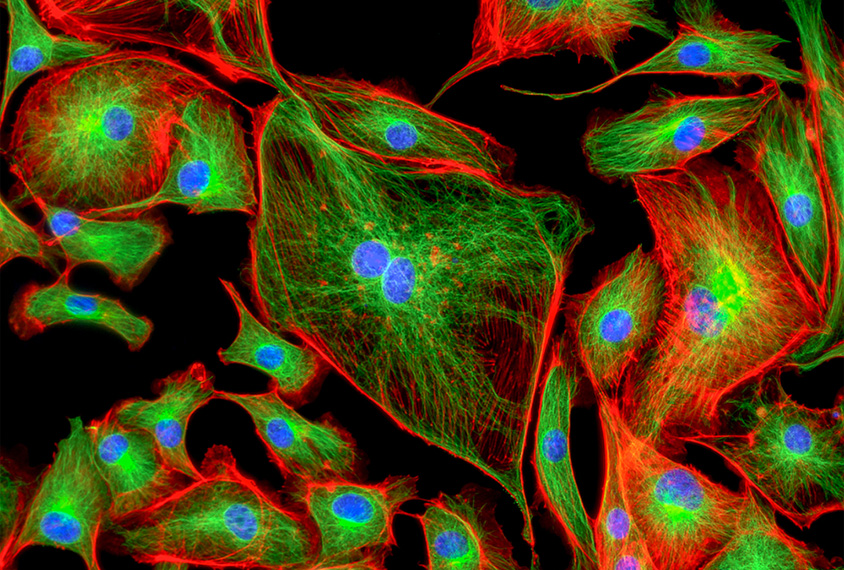 Unusual activity: Deleting a segment of chromosome 16 in endothelial cells may make mice hyperactive and groom too much.

Mice with an autism-linked deletion in chromosome 16 show abnormalities in their blood vessels and circulation. The mutation produces autism-like behavior in mice even when restricted to endothelial cells, which line blood vessels.

The work suggests a role for the vascular system in autism.

“We can’t just look at neurons,” says Julie Ouellette, a graduate student in Baptiste Lacoste’s lab at the University of Ottawa. “The vessels are developing and growing with the neurons in parallel, so it would make sense that both of them are closely related.”

Studies in postmortem brains suggest that some people with autism show excessive blood vessel growth. And brain imaging techniques that use blood flow as a proxy for neural activity reveal differences in blood flow between autistic people and controls. But few studies have examined properties of endothelial cells in autistic people — and whether any changes in them influence behavior.

In the new work, Ouellette and her colleagues used imaging techniques to examine changes in circulation in mice with a deletion in 16p11.2, a region on chromosome 16 implicated in autism. They also analyzed gene expression patterns in the mice’s endothelial cells.

Go with the flow:

The researchers first used a technique that involves injecting microbubbles into the animals’ blood and imaging the bubbles’ movement as a proxy for blood flow. The images show that the mutants have better distribution of blood than controls.

The mutants also show an unusual pattern of blood flow when the researchers agitate their whiskers with an electric toothbrush. “The vascular response to neural activity is not normal,” Ouellette says. The irregular flow does not result from a difference in blood pressure or heart rate.

The team also found that the blood vessels in the mutants’ brains have unusual properties. For instance, the middle cerebral artery in mice does not respond to compounds that relax or constrict this blood vessel in controls.

The team then deleted 16p11.2 in only endothelial cells in otherwise ordinary mice. Blood flow in these mutants differs from that in controls. These mice are also hyperactive and show excessive grooming, akin to repetitive behaviors of autism. They do not have unusual social behaviors or other autism-like traits, however.