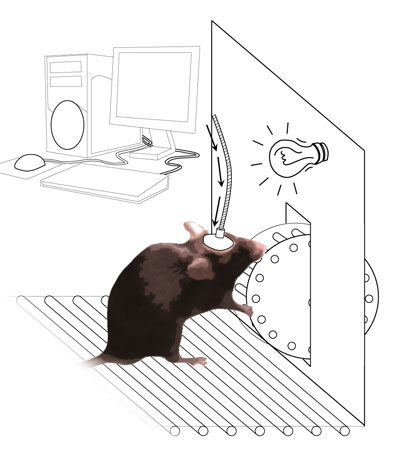 Round and round: Mice learn that pushing a wheel delivers a jolt of pleasure to their brain, similar to a drug high.

Mice that model Angelman syndrome, an autism-related disorder, are more motivated to earn rewards than control mice are, according to a poster of unpublished data presented Wednesday at the 2012 Society for Neuroscience annual meeting in New Orleans.

Angelman mice are abnormally sensitive to direct electrical stimulation of brain circuits that rely on dopamine, the study found. Dopamine is a neurotransmitter involved in the brain circuits for body movements and reward. The latter is needed for deriving pleasure, for example from sex, food or gambling.

The Angelman mice release more dopamine in the reward circuit and less in the motor circuit than controls do, the new study found. The results may have implications for a clinical trial testing L-DOPA for children with Angelman syndrome. L-DOPA is a chemical precursor to dopamine that relieves tremors in some people with Parkinson’s disease.

“I wonder about the L-DOPA trial for a number of reasons,” says Thorfinn Riday, a graduate student in Benjamin Philpot’s lab at the University of North Carolina, Chapel Hill, who presented the work. Although the drug curbs tremors in many individuals with Parkinson’s disease, it can also bring on compulsive gambling and sexual behavior.

The new data suggest that even if L-DOPA improves the tremors that many children with Angelman experience, “it may make them more wild,” he says. “I think it’s important for the doctors who are prescribing the L-DOPA to just be aware that [the children] are potentially more sensitive in the reward system.”

Individuals with Angelman syndrome have a happy demeanor, but can also be aggressive. They don’t speak and may suffer from seizures and severe tremors.

The disorder is caused by disruptions in the UBE3A gene. Intriguingly, researchers have identified a handful of individuals with autism who carry extra copies of the same gene1.

The new study is one of a growing number to implicate the dopamine system in autism and related disorders. Dopamine neurons that lack MeCP2, the gene mutated in Rett syndrome, show an array of defects that could explain the associated motor problems. Mice lacking chromosomal region 16p11.2, an autism hotspot, also show problems in dopamine neurons, according to other unpublished research presented at the meeting.

Some researchers hypothesize that the social impairments at the heart of autism arise because those individuals don’t find interpersonal interactions rewarding.

In the new study, the researchers inserted an electrode into the animals’ brains to trigger the release of dopamine in the reward circuit. The animals learn that every time they turn a wheel, they get a pleasurable jolt. The researchers can then adjust the level of electrical stimulation, making the wheel-turning more or less rewarding.

As the researchers gradually lessen the stimulation, they find a level at which control mice no longer move the wheel. “It’s no longer motivating,” Riday says. “Basically, it’s not worth the work.” That same level of stimulation is enough to drive Angelman mice to turn the wheel, however.

A series of biochemical experiments on young mice showed that these behavioral differences don’t arise because the mutants have fewer dopamine neurons or because those neurons make less of the chemical.

Instead, the increase in dopamine release suggests that there is an intrinsic defect in how the neurons work, the researchers say.