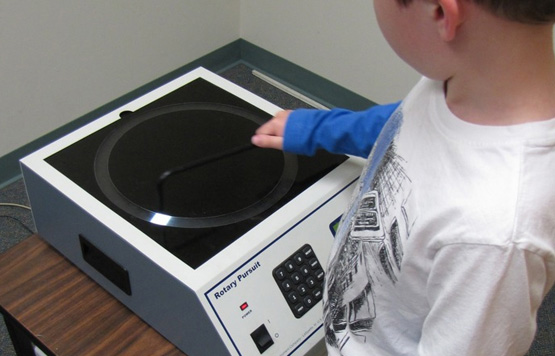 At the wheel: Some children with autism struggle with movement tasks, such as using a wand to trace the outside of a spinning circular disk.

Children with autism rely on conscious planning, rather than habit, to control their movements, according to the first brain imaging study to examine motor performance in the disorder.

The work, published online 23 April in Brain1, found that children with autism show less activation in the cerebellum, the brain area responsible for automatic movements, and more in the region important for planned movements, than do healthy controls.

Despite much evidence revealing the extent and prevalence of motor impairments, researchers say that these deficits are often overlooked in diagnosing and studying autism. Yet studying motor skills might reveal specific clues about how the brain is abnormally wired in individuals with autism.

“Children with autism have difficulty with motor skill development that seems to parallel problems with social skill development,” says Stewart Mostofsky of the Kennedy Krieger Institute in Baltimore. “It’s likely that there is a common underlying neural system impairment that contributes to the motor, social and communicative deficits.

Up to 70 percent of children with autism exhibit at least one stereotyped movement, such as flapping of the arms and legs, staring at objects, pacing or repeatedly opening the mouth2.

Problems with non-repetitive movements, although not included in the standard diagnosis, may be even more common. An estimated 80 percent of children with autism have trouble with a range of motor tasks, such as throwing balls, balancing on one foot and writing with pens3.

Some studies have also shown that children with autism are delayed in basic motor milestones, such as sitting up and walking, and more complex skills such as riding a tricycle4.

Still, the diagnosis of autism relies mainly on the observation of specific social and communication deficits. The presence of stereotyped or repetitive patterns of behavior is sometimes neglected during diagnostic evaluations.

In the new study, researchers led by Mostofsky compared the brain activity of 13 children with autism with that of 13 healthy controls while the children tapped each finger to their thumb in a repeated sequence.

The new data also show that children with autism have less connectivity between different regions of the brain involved in coordinating and executing movement, supporting the emerging hypothesis that distant regions of the autistic brain don’t communicate5.

“What we found is that the decrease [in connectivity] was particularly apparent during actual finger sequencing, as opposed to rest,” Mostofsky says. “This really suggested that there’s something abnormal about brain circuitry in general that is critical for learning and then executing these kinds of motor behaviors.”

The study is an exciting step in helping researchers understand the neurobiological underpinnings of motor impairment in autism, says Nicole Rinehart, a senior lecturer in psychological medicine at Monash University in Australia. Rinehart’s research has shown that children with high-functioning autism have specific impairments in walking that implicate the cerebellum.

Although researchers have known for decades that children with autism have motor difficulties, they did not start thoroughly describing these symptoms until the 1990s.

In 1996, Canadian speech pathologists proposed that motor troubles in autism are not just secondary features of the disorder. They argued instead that some of these problems, such as delay in starting speech or freezing during motor activities, can lead to or worsen social and communication deficits6.

“Our motor system influences pretty well everything we do — how we walk, talk, move or gesture to someone,” says Deborah Dewey, director of the Alberta Children’s Hospital’s Behavioral Research Unit in Canada, who studies motor symptoms in autism and other disorders.

Around that time, Mostofsky noticed that children with autism have difficulties with motor development, particularly in complex movements such as pumping their legs on a swing and fine motor skills such as handwriting. Because some studies had revealed a possible role of the cerebellum in autism, he embarked on a line of work to try to connect specific motor symptoms with abnormalities in this brain region.

Mostofsky’s new study measured brain activity during one type of task — sequential finger-tapping — in children 8 to 12 years old who have high-functioning autism.

“We don’t know how much the brain pattern differences [seen in the study] would generalize to other groups,” such as children of different ages and motor abilities, says Justin Williams, senior lecturer in child and adolescent psychiatry at the University of Aberdeen Medical School in Scotland.

Lacking a validated test for motor stereotypes, researchers have also had to blend and validate several existing scales, making it difficult to compare results from separate studies.

One popular measure is the Movement Assessment Battery for Children (M-ABC), which tests for a broad range of skills, such as the ability to catch a ball, balance on one foot and pick up wooden pegs.

The new study used the Physical and Neurological Examination for Soft Signs, or PANESS, a motor test that assesses finger tapping and sequencing, and heel-toe coordination. Although it tests a narrower range of motor abilities than does the M-ABC, PANESS is useful because its tasks are meant to activate specific brain regions, Dewey says.

The new study’s methods can be applied to other developmental disorders as well. For instance, Dewey is using brain-imaging techniques to analyze differences in brain activation between children with autism and those with developmental coordination disorder.

These studies could distinguish people with autism from those with Asperger syndrome, a high-functioning autism spectrum disorder characterized, in part, by a poorly coordinated walk. Rinehart’s group has observed that people with the two disorders have slightly different ways of carrying their upper bodies while walking.

“What [the observation] shows us is the parts of the brain that are abnormal in autism and Asperger’s that relate to gait function and movement control are different,” Rinehart says.

Studying motor deficits may also help better characterize the ways that people with autism learn motor patterns, such as riding a bicycle.

For example, Mostofsky’s group reported in December 2008 that children with autism adapt differently to changes introduced in a ‘rotary pursuit’ task, in which children use a wand to trace a moving target in a circular motion8.

Mostofsky is considering tying together his various projects to look at brain activation not only during motor execution, but also during motor learning, to understand how the entire brain codes motor commands. “It would be interesting now to have them learn a motor sequence and look at temporal synchronization between brain regions,” he says.