Study hints at dietary chemical as therapy for type of autism 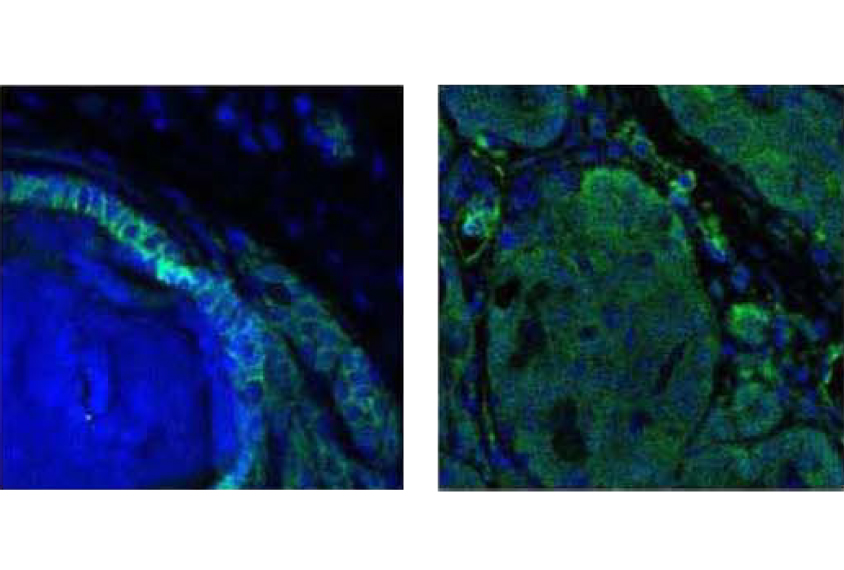 Protein power: A compound found in kale boosts levels of a protein (green, right) that is mutated in some forms of autism.

A compound derived from cruciferous vegetables, such as broccoli and kale, might limit the impact of certain mutations in a top autism gene, a new study suggests1.

The work was done in cellular and animal models of cancer, so its relevance to autism is preliminary. And for some people with autism — in which different mutations may be involved than in cancer — the treatment could even be harmful.

The compound, called indole-3-carbinol, or I3C, acts on the gene PTEN, a tumor suppressor. The gene is also mutated in roughly 1 percent of autistic people. A number of autism genes have ties to cancer.

The new study shows that I3C boosts the levels of functional PTEN protein in cells. In both autism and cancer, typically only one copy of PTEN is mutated, so the increase would compensate for the mutated copy.

I3C has promise as an autism treatment, but only if it can be coaxed to cross the blood-brain barrier, says study investigator Wenyi Wei, associate professor of pathology at Harvard University.

“There are a few chemical tricks you can do to enrich the drug’s potential to pass the blood-brain barrier,” he says.

The work also suggests that other chemicals that act on the same cellular pathway are worth exploring as treatments.

However, chemicals such as I3C could harm autistic people with certain PTEN mutations, says Charis Eng, chair of cancer genomic medicine at the Cleveland Clinic Lerner Research Institute in Ohio, who was not involved in the study. Unlike in cancer, PTEN mutations in autistic people tend to alter the protein rather than disable it. If the altered protein is toxic, I3C could enhance its toxicity and cause harm, she says.

The compound is available in drugstores as dietary supplement, but Eng strongly cautions against taking it in supplement form.

Wei and his colleagues were searching for a cancer therapy for people with PTEN mutations. They focused on an enzyme called WWP1 that keeps PTEN in check; when one copy of PTEN is mutated and PTEN levels are already low, WWP1 can deepen the deficit. In fact, the team found, the enzyme’s activity is enhanced in several cancers.

In support of this theory, they found that deleting the gene that encodes the enzyme in a mouse model of prostate cancer shrinks the number and size of tumors in the mice.

The researchers hoped I3C would have the same effect by binding to and blocking WWP1, because it blocks an enzyme with a similar structure. Sure enough, an infusion of I3C produced fewer and smaller tumors than usual in a mouse model of prostate cancer and enhanced the amount of active PTEN. The work appeared in May in Science.

The findings do not immediately translate to autism. For one, it’s unclear whether the enzyme regulates PTEN in neurons. It plays other important roles in a cell, so blocking it may lead to unexpected side effects, says Mustafa Sahin, professor of neurology at Boston Children’s Hospital, who was not involved in the study.

“It’s very exciting as a potential treatment option, but there’s quite a bit of work to be done,” Sahin says.

Wei and his colleagues aim to test the I3C in people with certain cancer mutations; they are also looking for ways to get the chemical into the brain.