Study fingers cause of motor problems in Angelman syndrome 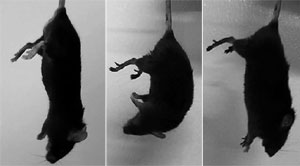 Stretching out: A drug can reverse (right) the abnormal curled-up posture seen in mice that model Angelman syndrome (center). Control mice are shown on the left.

Stretching out: A drug can reverse (right) the abnormal curled-up posture seen in mice that model Angelman syndrome (center). Control mice are shown on the left.

A net decrease in inhibitory signals in the cerebellum may underlie the movement problems seen in Angelman syndrome, a rare genetic disorder linked to autism, according to mouse research published 5 December in Science Translational Medicine1.

People with Angelman syndrome have difficulties with balance and fine motor skills, and many never learn to walk. Other symptoms of the disorder include intellectual disability, language impairment and epilepsy.

The new study suggests that loss of UBE3A results in increased levels of a protein called GAT1, or GABA transporter 1. That protein lowers levels of the neurotransmitter gamma-aminobutyric acid (GABA), whose role is to mediate inhibitory signals. The net result is a decrease in inhibitory signaling in the cerebellum.

The researchers showed that an experimental drug that activates GABA receptors normalizes electrical activity in neurons and improves motor function in a mouse model of Angelman syndrome. It’s not yet clear whether this drug would be feasible as a treatment for people with the syndrome, however.

“We are the first ones to obtain evidence that targeting GABA might help in Angelman syndrome symptoms,” says lead investigator Atsuo Fukuda, professor of neurophysiology at Hamamatsu University School of Medicine in Japan.

The work may also have implications for understanding the mechanisms underlying autism more broadly.

“There’s a growing consensus that autism is a consequence of an excitatory-inhibitory imbalance, and this would be in line with that general line of thinking,” says Benjamin Philpot, associate professor of cell and molecular physiology at the University of North Carolina-Chapel Hill, who was not involved in the study.

Philpot’s group reported last year that mice lacking UBE3A have less inhibitory activity in the cortex than controls do2. “As far as I know, this is the first time anything like that has been shown in the cerebellum,” he says.

The outer layer of the cerebellum has numerous tiny neurons called granule cells. In control mice, granule cells exposed to a chemical called bicuculline fire less often, and this effect lasts a long time. But the effect, called tonic inhibition, isn’t as strong in cells from UBE3A-deficient mice, the researchers found.

As a result, the granule cells are more excitable, firing more readily than normal.

Granule cells stimulate Purkinje cells, another type of cells specific to the cerebellum that are involved in motor coordination. Purkinje cells from UBE3A-deficient mice show an abnormal, overstimulated firing pattern, the researchers found.

However, it’s not clear that these differences in granule cells fully account for the motor symptoms associated with Angelman syndrome, other researchers note.

“I would like to have more evidence that this is actually causing the motor problems as we see them in the mice,” says Ype Elgersma, professor of neuroscience at Erasmus University in Rotterdam, the Netherlands, who was not involved in the work.

Elgersma’s team has unpublished data suggesting that other cell types in other parts of the brain also play a role in the motor difficulties of Angelman syndrome.

Fukuda and his colleagues also reported that the mutant mice have higher levels of GAT1. The protein binds to and removes GABA from the area around neuronal junctions, or synapses, which may explain the lack of inhibitory activity.

“I think that [identification of GAT1’s involvement] is a very nice addition, because that really zooms in on the molecular part of it,” Elgersma says.

UBE3A regulates the levels of other proteins in the body by breaking them down, and the researchers say GAT1 is likely to be one of UBE3A’s targets. They showed that in control mice, UBE3A binds to GAT1, a prerequisite for breaking it down. They also found that extracts from the cerebella of control mice rapidly break down GAT1, but those from UBE3A-deficient mice do not.

However, Philpot cautions that more studies are needed to confirm that UBE3A directly breaks down GAT1. UBE3A is believed to break down many proteins, but few of its targets have been definitively identified.

The researchers found that several drugs can repair the electrical imbalance in the mutant mice, and increase tonic inhibition in granule cells.

One of these drugs, an experimental sleep aid called THIP, also alleviates some of the movement abnormalities in the mice. Animals treated with THIP show improved gait, better balance and a decrease in the clasping reflex, an abnormal behavior seen in the mutant mice when they are held by their tails.

Other researchers are conducting mouse studies of THIP as a potential treatment for fragile X syndrome.

But using this drug to treat people with Angelman syndrome is likely to be tricky. That’s because increasing tonic inhibition might help in some regions of the brain and cause havoc in others.

“The therapeutic window might be very narrow,” says Kiyoshi Egawa, a member of the research team and a research fellow at Massachusetts General Hospital.

Still, even an imperfect treatment for Angelman syndrome would be worth pursuing, researchers say.

“These disorders are made up of multiple layers of deficits, and maybe without treating them all at once, if you treat a couple of those, it could increase the quality of an individual’s life,” says Seth Margolis, assistant professor of biological chemistry at Johns Hopkins University in Baltimore, who was not involved in the work.

Motor difficulties and cerebellar abnormalities are also of increasing interest in autism, although it’s not yet clear whether the results of the new study are relevant to autism overall.

The researchers plan to investigate whether tonic inhibition is reduced elsewhere in the brains of mice lacking UBE3A. “The same mechanism might be existing in the cortex or the thalamus, which might cause other brain dysfunction,” says Egawa.