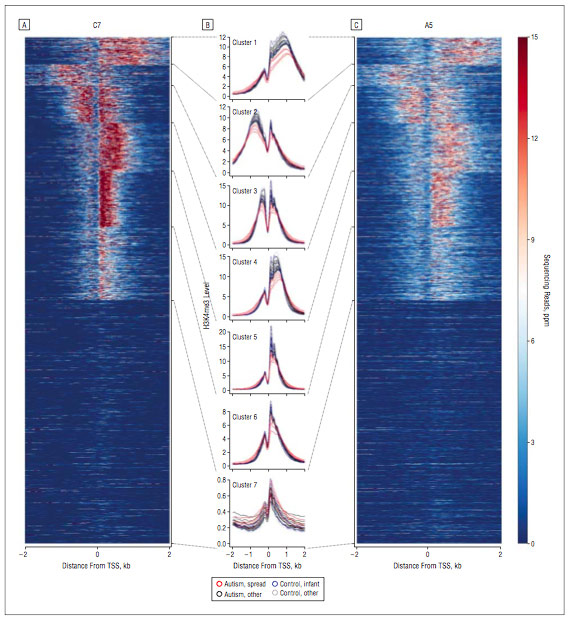 Histone hopping: In the brains of some individuals with autism (right) the precise location of certain epigenetic marks (red) is more variable than in control brains (left).

In the brains of individuals with autism, chemical changes to histones, proteins entwined with DNA, tend to show up near genes linked to the disorder, according to a study of postmortem brains published 7 November in the Archives of General Psychiatry1.

In the nucleus of every cell, threads of DNA wrap tightly around spools of histones. Methyl and other chemical groups that attach to either the DNA or histones can turn genes on or off. These so-called epigenetic changes add an extra layer of genetic control by tweaking the amount of RNA and protein produced without changing the underlying DNA sequence.

Many of these abnormal epigenetic marks land on or near known autism risk genes, suggesting that the biological pathways involving these genes may be important even in children with autism who do not carry mutations in the genes, the researchers say.

Researchers are just beginning to look at epigenetic changes in postmortem brain tissue. Because of the paucity of available tissue, the new study is one of only a handful to look specifically at the brains of individuals with autism-related disorders.

“I think this is an interesting study and a very good start to get at the epigenetic nature of mental disorders,” says Hongjun Song, professor of neurology and neuroscience at Johns Hopkins University in Baltimore, who was not involved in the study. “Its only limit is its small sample size.”

The overlap of epigenetic and genetic risk markers in autism “does make a lot of sense,” says Hans van Bokhoven, head of molecular neurogenetics at Radboud University Nijmegen in the Netherlands. Van Bokhoven is the author of a December report of epigenetic links to intellectual disability2.

Still, much more work is needed to determine the source of these alterations, he says. Epigenetic marks can be affected by mutations in far-away genes and by environmental factors such as diet, stress or toxins. “It’s not clear if these changes are a cause or consequence of the disorder.”

In the past few years, several groups have mapped the changes in epigenetic marks that occur during neural activity and across brain development. In a study published 30 October in Nature Neuroscience, for example, researchers charted a particular epigenetic mark — a methyl and a hydroxyl group added to DNA — in the mouse brain beginning shortly after birth and through adulthood3.

Several clues point to a role for epigenetics in autism.

For example, MeCP2, mutations in which cause the autism-related Rett syndrome, binds to methylated DNA. Glitches in enzymes needed for methylation have been linked to other forms of autism.

A July study reported that in cultured neurons, highly methylated regions of the genome tend to include genes related to autism and synapses, the junctions between neurons.

Using a technique called deep sequencing, the researchers created whole-genome maps of a particular kind of epigenetic mark, which involves the addition of three methyl groups to the histone H3. This mark tags about 20,000 sites in the genome, Akbarian says, and usually turns on gene expression.

The team found 503 spots in the genome where the brains of individuals with autism have histone methylation and controls do not, and 208 places where the reverse is true. These regions include 89 sites near genes that have been linked to autism, including CACNA1C, NRCAM and SEMA5A. “That’s way more than you would expect randomly,” Akbarian says.

Interestingly, although most of the autism brains showed some epigenetic differences, the majority of changes occurred in 4 of the 16 samples.

“It’s pretty striking. I think of the epigenome like a landscape, and instead of sharp mountain peaks, [the autism brains] are flatter,” says Janine LaSalle, professor of medical microbiology and immunology at the University of California, Davis, who was not involved in the new study. “I think it’s early to tell what that means yet.”

Akbarian agrees that it’s unclear whether this is an authentic signature of some subset of autism cases, or an artifact of these particular samples and methods. “This is an unresolved mystery,” he says.

The epigenome may be more amenable to therapies than the fixed DNA code. Akbarian’s team plans to look for histone methylation marks in blood samples from children with autism that could serve as biomarkers.

“We’re trying to find out, if we do this in blood, will we find some of the same loci that showed up in the brain?” he says. “That would be really interesting because that would be a way to stratify patients.”