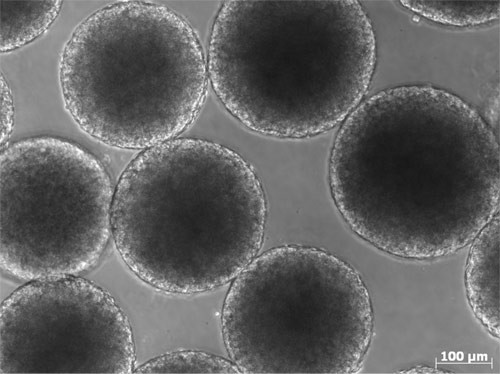 The process used to transform adult cells into stem cells, called reprogramming, doesn’t trigger a host of genetic variations, according to a study published 18 November in Nature1. What’s more, at least half of the genetic variability seen in stem cells derived from skin arises from differences in the skin cells themselves.

Induced pluripotent stem cells, or iPS cells, are undifferentiated cells created by reprogramming adult cells. Because they recapitulate an individual’s genetic make-up, they can be used to study disorders, including autism, or to screen therapies.

The new findings are likely to be a relief to iPS cell researchers because they suggest the cells are genetically stable.

Some research has hinted that the process used to create iPS cells introduces new genetic variations, such as copy number variations (CNVs) — deletions or duplications of stretches of DNA.

“If CNVs are artificially induced by the reprogramming procedure, we would be looking at an iPS cell line that no longer reflects the DNA of the person from whom it was derived,” says the new study’s lead investigator Flora Vaccarino, professor of neurobiology at Yale University.

But the new findings show that this doesn’t occur very often.

“This is one of these issues that everyone thought was going on but no one had demonstrated before,” says Jeanne Loring, director of the Center for Regenerative Medicine at the Scripps Research Institute in La Jolla, California, who was not involved in the study. “It’s the first study of its kind, and I am hoping more people do it.”

The other half may have arisen during reprogramming, or they may be present at such a low frequency in fibroblasts that they are impossible to detect.

The findings also suggest that skin — and perhaps other tissues — is a genetic mosaic, harboring cells whose genomes mutated at some point in development. Though previous studies have hinted at this type of variability2, this study is the first to catalog it at this level of detail.

The researchers analyzed three iPS cell lines derived from each of seven people. Cell lines derived from the same person should theoretically have genomes identical to each other and to that of the source cell. This suggested that any differences among them would have arisen during reprogramming.

“But always in the back of our minds was the idea that CNVs are present in fibroblasts, and we just can’t see them,” says Vaccarino.

iPS cells are derived from a single adult cell, and reflect the genetic make-up of that cell. Any genetic changes in the origin cell are amplified in the daughter cells, and therefore easy to detect in iPS cell lines.

However, when researchers analyze the skin cells used to generate an iPS cell line, they sequence the DNA of many cells mixed together. If a mutation is present in just a small number of cells, it is difficult to detect with typical sequencing techniques.

A major clue came when researchers discovered two iPS cell lines from the same person harboring the same CNV, which would be extremely unlikely to happen by chance. Careful genetic analysis of the original skin cells identified the CNV in about 20 percent of the cells.

The researchers then used specialized techniques to amplify and sequence the genomes of the skin cells, aiming to detect variations present in just a few cells. Of the 20 CNVs they identified overall, 10 were present in skin cells.

The level of analysis in the Vaccarino study was possible because of the dropping costs of whole-genome sequencing.

“It’s only recently that someone could afford to sequence 20 lines,” says Ricardo Dolmetsch, assistant professor of neurobiology at Stanford University in California, who was not involved in the study.

Dolmetsch says the findings are in line with preliminary research from his own lab. He recently joined the nonprofit Allen Institute for Brain Science in Seattle, where he launched a large-scale project to create, analyze and distribute iPS cell lines from people with different disorders.

Whether the remaining 50 percent of variation that Vaccarino’s team reported results from reprogramming is not yet clear, but Dolmetsch says the specific method used to create iPS cells can influence genetic variation.

Vaccarino says the results suggest that researchers should be doing more intensive genetic analysis of iPS cell lines. Her team compared both whole-genome sequencing and microarray analysis, which is much cheaper, and found that the latter is much less reliable in detecting CNVs.

But Dolmetsch says he thinks that would be too expensive. Each line costs about $3,000 to sequence, “so doing significant number of lines gets very expensive very fast,” he says.

From a purely practical point of view, he says, researchers are probably better off studying several lines derived from different people with the same mutation and looking for biological changes common to all of them. Researchers need to do this anyway to make sure that the patterns they study in cells are the result of the disease-linked mutation rather than genetic variability among individuals.

What’s more, everyone carries some CNVs, many of which have no detectable impact. So even if sequencing detects a CNV, it’s difficult to interpret whether it’s meaningful or not.

It’s not yet clear whether the findings will translate to other tissues, but Vaccarino’s team has begun analyzing genetic variability in brain cells. If CNVs spontaneously arise in the brain during development, they might contribute to neurodevelopmental disorders, she says.

“It’s very expensive and a large undertaking, but someone needs to do it,” says Vaccarino. “Hopefully this will open a field in which people start looking for these events.”