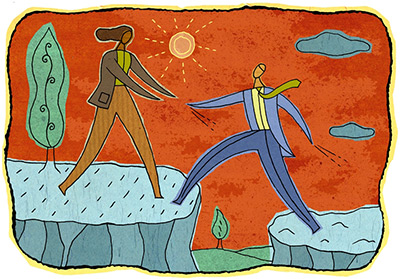 Mind the gap: As teenagers with autism age out of pediatric medical practices, they may struggle to find doctors willing and able to provide care.

Adjusting to adulthood can be difficult for any young person, but for adolescents with autism or other developmental disorders, the transition can be especially difficult. Leaving high school often means losing valuable social services1 as well as a chance to interact with peers2, and many of these young adults struggle to find jobs.

In the midst of such challenges, these adolescents are also aging out of pediatric healthcare services, leaving behind the doctors they have come to know and trust.

Although researchers have begun to document many of thepressures that young adults with autism face, “about the transition out of pediatric care, we really know next to nothing,” says Julie Lounds Taylor, assistant professor of pediatrics and of special education at Vanderbilt University in Nashville, Tennessee.

A large study underway in the U.K. aims to fill this research gap. The project, described 23 July in BMC Public Health, is following 450 teenagers with complex health problems — 150 each with autism, cerebral palsy and type 1 diabetes — as they graduate from pediatric healthcare services and enter the adult system3.

The researchers, based at Newcastle University, plan to spend three years tracking these adolescents’ encounters with the medical system, as well as their overall health and well-being. Their aim is to identify the clinical strategies and services that best aid patients in navigating this tricky transition.

“We’re very much hoping that we will be able to see models of good practice that other people can learn from,” says Helen McConachie, professor of child clinical psychology at Newcastle University and one of the study’s investigators.

By identifying the medical practices that are associated with successful transitions — and collecting the teenagers’ own opinions about their care — the study may also serve as a jumping-off point for researchers who want to delve more deeply into the needs of young adults with autism or related conditions.

Graduating from pediatric medical practices can present a variety of challenges. It can, of course, be difficult to leave a familiar doctor, but many adolescents with complex health needs — particularly those arising from neurodevelopmental disorders — may also have trouble finding new healthcare providers who are both willing and able to treat them, experts say.

“There really aren’t many adult psychiatrists and adult internists who are trained to work with people with developmental disabilities,” says Paul Shattuck, associate professor at the Brown School of Social Work at Washington University in St. Louis, who was not involved in the study.

“These young people are aging into a network of services and supports where there’s no clear door to walk through that has their name on it,” Shattuck says. “There’s no adult-level clinical specialty.”

Young adults are also often expected to take more control of their own health needs, which can be a big change for those used to family involvement in their care.

Over the years, scientists, healthcare providers and policy makers have made a variety of suggestions for improving these transitions.

For instance, some have suggested that teens work with doctors to develop a written ‘transition plan,’ outlining the steps and tasks involved in moving on to a new medical provider. Another recommendation is that they work with a single, designated caseworker, who can help coordinate care, answer questions and provide support throughout the process.

But the empirical evidence behind many of these recommendations is limited4 — based on small, cross-sectional, qualitative studies or on those that focus purely on individuals with chronic physical illnesses, such as diabetes.

“In diabetes, there’s been ten years of quite intensive research on how to ensure a smooth transition between child and adult health services,” McConachie says. “At the point that we proposed the research, we did a review and found no published models at all on [autism].”

McConachie and her colleagues aim to remedy the problem by studying whether any of these recommended practices are associated with better health outcomes.

To represent a wide variety of healthcare needs, the study is enrolling adolescents — between the ages of 14 and 19 — with one of three different complex, ongoing conditions. One-third of the participants will be teens with diabetes, one-third those with cerebral palsy, and the final third will be those who have autism accompanied by a mental health issue, such as anxiety or depression, and who may be taking medications for it.

Because the goal of the study is to learn about healthcare transitions from the participants themselves — rather than through proxy reports from parents or caregivers — the scientists also chose to exclude those whose intellectual abilities are severely impaired and who cannot meaningfully participate in discussions about their own care. Enrollment, which began about a year ago, is expected to be completed this fall.

The researchers are following the teens as they transition out of children’s healthcare services, visiting each participant once at the beginning of the study and then once a year for the next three years. At each annual visit, they plan to assess the adolescents’ general health and well-being, evaluating factors such as mood, mobility and pain.

“I like that it’s a longitudinal study,” Taylor says. “It’s a lot harder to do this kind of work where you follow people over time, but it’s really important to see these processes unfold.”

The researchers also plan to evaluate the extent to which each participant is engaged in the activities normally associated with adulthood — for instance, whether he or she has a job, a social life or an intimate relationship.

They will also conduct interviews, comb through medical files and examine appointment logs to determine whether each participant has received any of nine recommended medical practices. Does the participant have a written transition plan? A key caseworker coordinating his or her care? Did he or she get the chance to meet any new healthcare providers in advance?

“Because of the large size of the sample, we hope to be able to detect patterns,” McConachie says.

In an effort to gain deeper insight into the transition process, the researchers also plan to select a cross-section of 15 participants — 5 each with autism, diabetes and cerebral palsy — to interview in more detail. These participants will be asked to document their own transition experiences, through written diaries, photos, videos or another method of their choosing.

This sort of detailed analysis may help tease apart the most important elements of complex healthcare and identify the “active ingredients” of a successful transition, notes Taylor.

The study does have one significant limitation: its exclusion of teens with severe intellectual impairments. That means that what the researchers find may not apply to all individuals on the autism spectrum.

Even so, experts say they are excited to see more scientific attention being paid to the challenges faced by young adults with autism, a group that has often been overlooked.

“I hope this is one of many more studies to come that will be focusing on these issues,” Shattuck says. “A bad launch into adulthood — that’s a set up for a cycle of failure and disengagement that can last many years.”