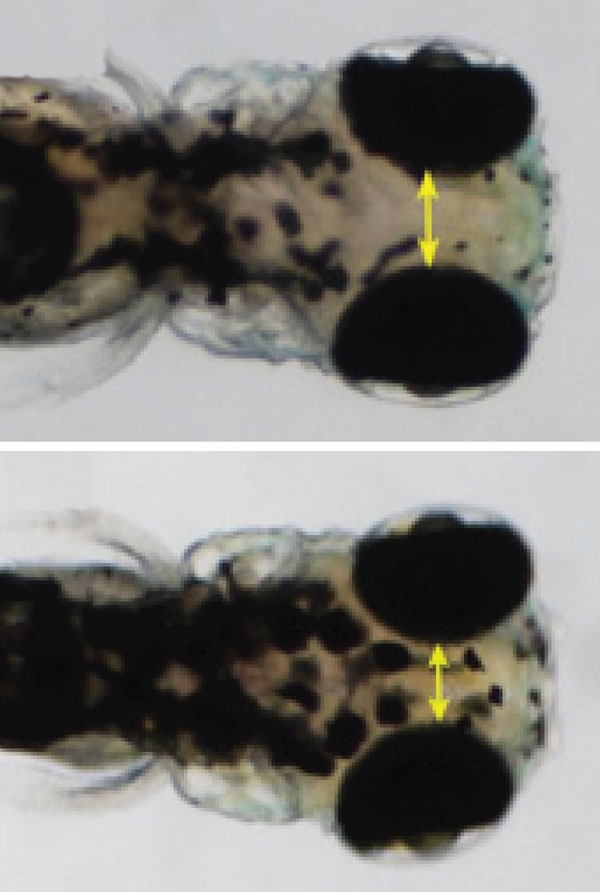 Fishy finding: Zebrafish with reduced CHD8 expression (top) have enlarged heads, reminiscent of the increased head size seen in people with mutations in the gene.

Several risk genes for autism regulate the expression of hundreds, even thousands of other genes. One of these is CHD8, which tops a list of genes that researchers have confidently tied to the disorder.

A new study, published 10 March in Nature Communications, reveals the thousands of genes that CHD8 controls1. Many of these genes are also linked to autism and some are master regulators in their own right. Mapping this intricate network is a step toward peeling back the layers of genetic complexity in autism, scientists say.

“You’ve got this large regulatory architecture that’s emerging from the data,” says lead researcher James Noonan, associate professor of genetics at Yale University. “CHD8 is our entry point to understanding what that network looks like.”

An independent study published in October also delved into the genes that CHD8 controls. It similarly identified thousands of possible targets and indicated that they may function at two stages in development2.

Together, the two sets of findings kick off the massive undertaking of mapping the genes downstream of many autism candidates. From this information, researchers hope to find possible targets for new drugs.

The work could also help to explain the spectrum of symptoms seen in autism.

“One thing that has been so confusing about autism is how a genetic disorder can have such a complex phenotype, but now we understand that it’s because autism is genetically complicated,” says Genevieve Konopka, assistant professor of neuroscience at the University of Texas Southwestern in Dallas, who was not involved with the study. “Now that we have these pathways, we can go in and see how they fit specific subsets of patients.”

The CHD8 protein binds to chromatin — the coiled complex of DNA and proteins that makes up chromosomes. In the October study, researchers identified more than 7,000 sites in the genome at which CHD8 binds. They looked specifically at DNA in stem cells that are developing into neurons. Many of these sites fall near other candidate genes for autism.

“CHD8 binds pervasively throughout the genome and there are many, many, many genes that could potentially be regulated by CHD8. Yet those genes seem to be strongly enriched with autism genes,” says lead investigator Michael Talkowski, assistant professor of neurology at Harvard Medical School.

The new study extended this work to three types of tissue. In addition to neurons-to-be, Noonan and his team looked at fetal brain tissue from both mice and people. They identified 1,910 binding sites for CHD8 that are common to all three, underlining the sites’ importance for brain development.

The proportion of autism genes among CHD8 targets is surprisingly high. For example, of 116 autism risk genes identified in a 2013 study, 47 are targets of CHD8. Many of CHD8’s targets belong to a network of autism risk genes that are expressed primarily during mid-fetal development, suggesting that mutations in CHD8 are most likely to exert their effects during this time.

Noonan’s team did not see the same enrichment of autism genes in the CHD8 binding sites that are unique to stem cells, however. This result indicates that mutations in CHD8 have the strongest impact after these cells develop into neurons, says Dalila Pinto, assistant professor of genetics at Mount Sinai Hospital in New York.

Talkowski and his team also showed that halving the levels of CHD8 in stem cells — which mimics the effect of CHD8 mutations in people — alters the expression of 1,756 other genes.

Many of these genes, especially those with dampened expression, are linked to autism through their role at neuronal junctions, or synapses. Few of these interact directly with CHD8, however, suggesting that CHD8 affects their expression indirectly.

By contrast, many of the autism genes that interact directly with CHD8 are chromatin regulators themselves. Timing-wise, the genes that act at synapses are expressed later in development than those with regulatory roles.

Together these results suggest that CHD8 mutations may contribute to autism at two stages of development, and through different pathways: gene regulation and neuronal signaling.  “We now have a window into each of these different pathways that CHD8 is regulating,” Talkowski says. “It will be very nice to break each of them down and deeply investigate them.”

To further that line of inquiry, the researchers are turning to animal models. Talkowski and his team have found that halving CHD8 expression levels in zebrafish leads to enlarged heads, reminiscent of the increased head size seen in people with CHD8 mutations. Noonan and his team are studying mice with these mutations — an especially promising approach because mouse and human fetal neurons share binding sites for CHD8, he says.

“Having an experimentally tractable in vivo model like the mouse is really essential,” says Noonan. “You can recapitulate the genetic case that you have in humans, do very high-resolution analysis in brain development and really pinpoint what’s going on.”