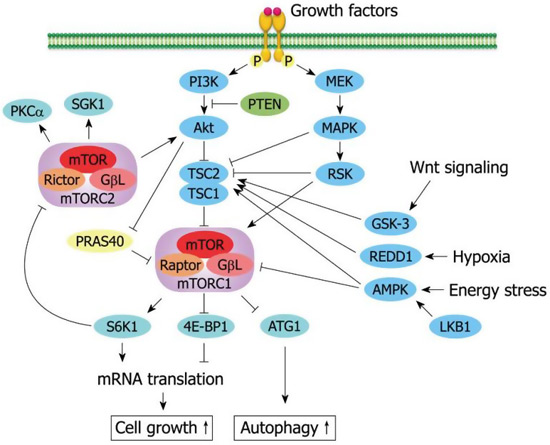 A drug that interferes with a biochemical pathway important in cancer can reverse some brain defects in mouse models of fragile X syndrome, according to a study published 11 August in the Journal of Neuroscience1.

Several genetic and animal studies in the past few years have linked the same pathway, called the phosphoinositide 3-kinase (PI3K) pathway, to autism.

The new report is one of the first to investigate the pathway’s role in fragile X syndrome, a genetic disease that leads to mental retardation and, in about one-third of cases, autism.

The findings suggest that glitches in PI3K could explain some of the overlap between the conditions, according to lead investigator Gary Bassell, professor of cell biology at Emory University in Atlanta.

The PI3K pathway is important for cell growth, survival and programmed cell death. It includes several proteins — such as PI3K, mammalian target of rapamycin (mTOR), phosphatase and tensin homolog (PTEN) and tuberous sclerosis protein 1 (TSC1) — that, when damaged, can cause cancer.

Mounting genetic evidence suggests that these proteins are important in the development of autism as well. For example, in a study published in the June issue of Autism Research, researchers at Ohio Children’s Hospital reported that mutations in the PTEN gene — a tumor suppressor — crop up in approximately two percent of children with autism, and in seven percent of children who have enlarged heads and autism2.

Individuals carrying mutations in TSC1 have tuberous sclerosis complex (TSC), which causes benign tumors all over the body and, often, autism. Mutations in TSC1 interfere with the normal formation of axons, the slender projections that conduct electrical signals between nerve cells.

The protein missing in fragile X syndrome, FMRP, controls production of proteins at the synapse, the junction between neurons.

“This pathway exerts exquisite control over how neurons communicate in the normal brain,” notes Suzanne Zukin, professor of neuroscience at Albert Einstein College of Medicine.

When the pathway functions normally, mTOR and PI3K both help regulate the precise quantity of proteins made at the synapse. At the same time, PTEN, FMRP and TSC1 act as a chemical brake on mTOR and PI3K to prevent too much protein from accumulating. Together, these proteins control synaptic plasticity — the strength and flexibility of a neural signal — which is important for learning and memory.

“This network of genes and proteins is so intricate,” says Eric Klann, professor of neural science and biology at New York University, and one of Zukin’s collaborators. “If you remove or change just one element, it will likely cause a ripple effect all along the pathway.”

Zukin and Klann found that in mice missing FMRP, PTEN no longer exerts its brake on mTOR, which in turn leads to an excess of proteins at the synapse. “[This] likely explains some of the intellectual disability associated with these disorders,” Bassell says.

Although these drugs are not yet approved to treat people with fragile X syndrome or autism, they are strong candidates, Bassell says.

Other compounds that act on the pathway may also help individuals with either disorder. The most talked-about molecule is rapamycin, a decades-old drug that blocks mTOR.

In 2008, Mustafa Sahin‘s team at Harvard University found that mice lacking the TSC1 gene in neurons survive much longer when given rapamycin4. The drug also prevents the abnormalities typically observed in TSC, such as brain enlargement. Early clinical trials are investigating whether rapamycin reduces tumor growth in people with TSC.

“So far, rapamycin looks very promising to treat TSC,” says Randi Hagerman, director of the MIND Institute at the University of California, Davis, who was not involved in these studies.

Rapamycin may also reverse some of the neurological defects in fragile X syndrome and autism. In mouse models of autism, rapamycin enhances performance on several spatial learning tasks5. “However, we haven’t made plans yet to use rapamycin to treat fragile X or autism, partly because of its extreme side effects,” Hagerman notes.

Rapamycin can cause gastrointestinal problems, mouth ulcers, and increases cholesterol and triglyceride levels. What’s more, rapamycin may only help a select population of people with autism — those who have a hyperactive mTOR pathway.

If mTOR functions normally, inhibiting it would prevent essential protein production at the synapse, with serious consequences for communication between neurons.

“I’d be very cautious about testing this drug on people with autism,” says Sahin, assistant professor of neurology at Harvard. “We’d have to carefully screen the people with autism for defects in mTOR before trying out rapamycin.”